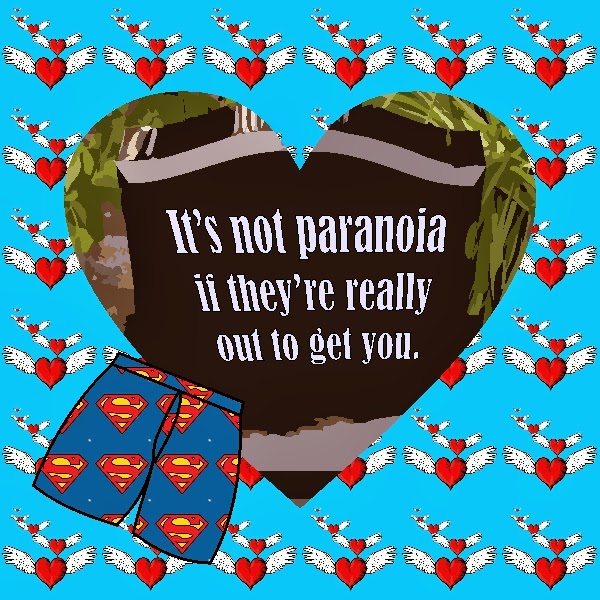 Incredible.
Vern suspected that all was not well about two weeks and three days after his marriage. It was also the day after he had changed his will to leave all he had in the world, should he predecease her, to his brand new wife. And now he thought she might be trying something.

He wasn’t paranoid at all, nuh-uh.

“Nonsense,” said his Mother. “She loves you dearly. You were lucky to find her at your stage of life.”

“But she bought me Superman underwear,” said Vern, “and I’m not really that super, especially not in bed. I’m a bit out of practice.”

But his Mother didn’t want to know.

“You were never in practice mate, were you?’ said Will. “How old are you? Forty-four? And your wife’s twenty-three? If she’s buying you Superman boxers, take the compliment and keep on leaping at tall objects. What else has she bought you?”

Vern pondered whether to tell Will about the replica Batman utility belt that she had given him on their honeymoon, filled with condoms, all extra-large. He decided not to. Will was all right as a friend. Nice to have a drink or two with but not someone he felt he could trust. There were the occasional rounds he missed buying because he was a bit short, or the way he sometimes spoke about women in a disrespectful manner. Once Vern thought he’d caught Will giving his young bride the once over with a glance that seemed much too lusty for a friend.

Will had also started pandering a bit to Vern. It was something he was used to, even though he disliked it a lot. It had taken a while for the village to settle down to having Vern back home. Vern the swot, Vern the genius, Vern the scholarship to Oxford brat at thirteen, Vern, who’s IQ was off the charts, Vern who was always a little bit strange.

That wasn’t so bad, but it was the other epithets he knew he carried that made pandering a common event. Vern the computer nerd, Vern the retired millionaire at twenty-seven. Vern the recluse who had lived at the manor house for seventeen years; lucky with money, unlucky in love. Very lucky with money. His two partners bought him out, citing his eccentric ways, two months before the bubble burst. He ended up with all the money in a bank. As far as he knew one of them was now in banking and the other a car salesman. He’d been right to be untrusting then, just as he was now. They nearly got him that time.

Plus, the real reason that Vern never mentioned the belt was that the XLs were too big for him and kept slipping off. Vern was at most a medium, so if she hadn’t bought them for him, then who?

As usual, when troubled with questions like this Vern turned to Alvin, his best mate in the whole world.

“She bought them for Will, you big silly,” said Alvin. “She’s trying to off you and then she and the big Willy boy will live happily ever after in your mansion with your half a billion quid.”

“We don’t really say quid anymore Alvin,” said Vern. He sat next to the gravestone, idly tracing the chiselled marks. Alvin Lancelot Martin. Born 14th February 1971, Died 14th February 1993. Alvin had been love with an out of town girl and she had played him, tore his heart out and then rebuffed him. On the Valentine’s Day that was his 22nd birthday, back in the days when guns were still easy to get hold of, he had put his Dad’s grouser in his mouth and toed the trigger.

Vern hadn’t taken it well. He had sealed himself off in his programming room for six months and had come out with a finished product and a new set of tics and aberrations. His two partners were delighted with the one even as they started to distance themselves from his more unusual behaviour.

Despite that, or maybe because of that, Vern felt that his conversations at the graveside were the only honest ones he had. And Alvin was sure that his new wife was trying to kill him.

The matter of the scarf sealed it for Vern. He came down one morning to find a parcel on the table for him with an X and a lipstick kiss on it and a card that said “Happy Valentine’s day, more to come”.

His wife had gone to Manchester to do some shopping and had taken his car. Her own, a silly little Italian convertible, wasn’t big enough for all she would buy. Vern was faced with the gloomy prospect of having to bend his lanky frame in and out of her car all day, and the thought blackened his mood. But then he saw the parcel, and he looked out onto a bright sunny day that was as rare in the middle of February as to be obscene, and suddenly an extended drive in a top down vehicle didn’t seem so bad. He poured himself coffee and eagerly opened his gift which was absolutely delightful. It was a Doctor Who scarf and it looked to be at least ten feet in length. Vern slung it jauntily round his neck; it still nearly reached the floor when he stood straight. He bent down to grab her keys and turned for the door. That was all he remembered.

Some hours later he stirred, groaning. There was blood on the back of his head where he had hit the ground when he tripped, and as he moved he nearly choked himself as the scarf tightened round his neck. Vern, panicky now, saw only what he wanted to see. Convinced that she had engineered the whole escapade, he said to himself, ‘And she bloody well nearly succeeded’.

Through the agonizing mists of his concussion he heard the Garage door open and the sound of his SUV driving in.

“Dear God, she’s back,” he said. He scrambled to his feet and headed in the opposite direction, straight out the front door. If he could make it to the copse he could sidle round to the main road and find a car to take him to the Police.

“Vern? Where are you Dear? I have a surprise for you.” She glanced through the window and saw him in the garden, walking towards the trees. He was teetering slightly squiff, as if drunk. ‘Well,’ she thought, not quite knowing what he was up to, ‘This is as good a time as any’. She pulled the gun out of the bag and walked after him.

Vern heard her come out the door, carrying what looked like a Walther PPK. He turned and tried to run as fast as he could. Unfortunately his headache was blinding him and he didn’t see the protruding root. He did however briefly see the way the land dipped into a hollow some five feet in height. It was the last thing he ever saw.

It wasn’t that much of a hollow, but it was enough for him to land very awkwardly.

“No I don’t know why he was heading towards the copse. I don’t know if he’s been behaving strangely. Everything is new and strange. We’ve only known each other three months and only been married less than three weeks.”

“And that?” said the sergeant taking her statement, as he pointed towards the gun.

“It’s a James Bond vodka flask,” she said. “He was a bit geeky and I loved him for it. I was always on the lookout for things like this for him. Last week I bought him Superman underwear. And then there’s this” She started to open a small parcel.

The two friends stood next to each other gloomily.

“So she wasn’t trying to kill me,” said Vern.

“Then why did you tell me she was?”

“She really did love you, you know,” said Alvin.

“Dunno. Just wander around I suppose.”

“It’s all I have so far. There’s a bit of good news though?

“You don’t feel like everybody’s out to get you anymore, do you?”

They were silent for a moment. Then Vern said, “How do you know she loved me.”

“That last parcel she was showing the police. I sneaked a look. It was for you. Another present. The sentiment was in the name.”

“I beg your pardon?”

“It was a Mister Incredible coffee mug.”