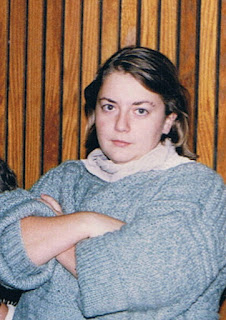 That's my sister on the left.

My parents gave me a 35mm camera for my graduation gift and I was going a bit nutsoid taking photos. Better to be behind the camera, is my motto. Obviously I had taken one too many of Joanne when she gave me that look.

That's her "big sister look:. Her daughter Sophie has it down pat. Joanne - or Joey as I called her - was technically my little sister. She was younger and shorter than me. That didn't stop her from taking over the big sister role somewhere around her second year of high school.

It was in her second year of high school that Joey joined the Drama Club and stage managed her first show. It was a farce - I remember that much. The next two shows were more memorable. She staged managed Charlie's Aunt and You Can't Take It With You. By then I was at Ryerson and didn't feel quite as immediately overshadowed by my sister.

At least we were never in Band together. I played upright bass in the Senior Band. She played alto sax in the Junior Band. I'm not sure if she was a better musician than me. She was better at performing though. And she loved her sax. By the way, a big thank you to Brooke McEldowney for his Sunday edition of  9 Chickweed Lane - not that I think he was aware of the tribute.

The big sister schtick continued after high school. I graduated from university first, but Joey married and had kids first. The big sister look had nothing on her "I'm your mother, that's why look."

Joey always gave the appearance of confidence that I couldn't match. I know now that she didn't always feel that sure of herself, but she could fake it 'til she could make it. I remember her teaching me how to schmooze at networking breakfasts we went to when we were starting to promote BelleFare Communications. She made it look so easy.

Even when she was flat on her back, cancer making bones increasingly fragile, Joey radiated strength. I was her caregiver and helped mother her children and well as my own. She still ruled the roost. Like any good "big sister" she felt she knew what was best for me. One thing she got absolutely right - I needed to be writing. So she organized time for me to do that and she insisted I had to be serious about it. This time I was going to get published.

Yesterday was the book launch for Under A Texas Star (and Rowena Throught the Wall and Cheat the Hangman). We had it at the Wooly. Ten years ago, we were celebrating Joey's fortieth birthday there.

My friend and current boss, Garry Ryan, was quoted in the Calgary Herald saying: “I set myself a goal to have a novel published by the time I was 40 and it happened when I was 50.”

I managed to have my first novel published in time for Joey's 50th birthday. She only made it to age 42, but I'm still counting the birthdays and this one was a landmark. 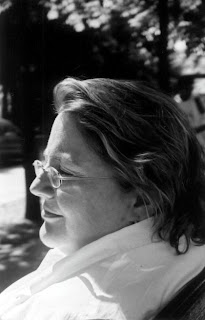