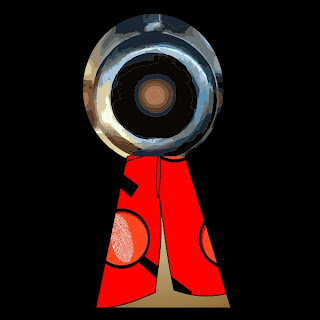 The Key to the Locked Room

There were four of them in the Strangers’ Library, the only room at the Diogenes Club where talking was allowed. The two brothers, a contrast in physical appearance, were obviously related by the similar steely look on their faces. The younger one was lean and aquiline, restless; the other was stouter, owl-like and predatory. He looked as if he was used to giving commands while his brother gave off the air of someone who ignored them.

Opposite them sat a small man dressed in the black of a priest out visiting. He wore a cheap suit, socks and plain shoes, with an ill-fitting shirt of the same colour and a biretta by his side that was patchy and worn. Alongside him, the tall man known sometimes as Duroc was an elegant contrast. His evening wear fitted perfectly, the bowtie rakish, the whole giving off an élan only the French seem to be able to carry.

“Monseigneur,” he said to Father Brown. “The conversation drags. Regale us with a mystery that is not of the faith.”

The others said nothing, their quietude taken as assent.

“Perhaps then, a locked room tale,” said the priest, “one that displays an apparent impossibility that is easy to spot if only you step away from human nature.”


“A miserly Squire has a room at the top of the stairs; solid walled and roofed, one door only and no windows. It is where he keeps his gold for he distrusts banks, and he has the only key to the unique lock. It may be accepted that the only mortal access to the room is through this door, off a landing, bare except for a window some forty feet away.”

“Every evening he is up there surveying his ill-earned gains. It is a spare room, save for the glint of bricks of gold lining the shelves. There is a desk and chair, a lamp, a ledger and atop of this his service revolver, almost as if it were a paperweight.”

“Now, as is the way of these tales, he has three nephews, Thomas, Daniel and Edward, each of whom hope to inherit. They live with him, their parents having died, and he treats them abysmally, so it is no surprise they harbour dark thoughts toward him. Only the possibility of the inheritance keeps them near, and they, in attempting to outdo the other in ingratiating behavior, had lain to rest all fraternal love that may once have existed.”

“The Squire amuses himself by playing them off against each other, and the resentment and hatred all four of the family members have for each other is palpable.”


“One night they hear a gunshot. Ned and Dan run upstairs to find Tom already at the door, struggling with the handle. ‘Over there, Dan,’ he says pointing to the key on the window sill. ‘Bring it to me.’ Dan does so and they burst in to find the Squire dead. It looks like suicide, except he is holding the gun in his left hand and he is right-handed.”

“The Police are called,” the priest continued, “and they determine it a murder. The scientific evidence is such that suicide is precluded.”

“How was it done?” he continued. “How did someone get into a sealed room, kill the Squire and escape the nephews? And how did the key end up outside the door?”

“It is an impossible crime,” said the Frenchman.

“There is no such thing,” said the younger Holmes. “One of the nephews is the murderer.”

“What about the key?” asked Mycroft.

“Ned and Dan said that Tom could not have done it from the time they heard the shot until they arrived at the door. It was only seconds before they had raced to the top.”


They sat and thought, two of the greatest intellects in the empire and perhaps one of the two best retired criminal minds. Occasionally one would stir, as if to say something, then, having paused, would subside again into the elegant green upholstery. All the while the little priest sat, placid and patient. It may have been possible to detect the tiniest of glints in his eyes, but probably not.

Eventually the slight grinding of Mycroft’s molars subsided, the sucking on the cherry wood pipe of his brother ceased, and the Frenchman, quiet enough all this time to have seemingly changed nationality, found his élan once more and gestured disparagingly to the prelate.


“Tell us then,” said Flambeau as the other two feigned good grace.

“Tom did it,” said the priest, “although who knows if the other two would not have done the same, given the opportunity. He saw a chance to sneak up behind his uncle and he hit him on the side of the head as he was opening the door. It was the left side, which was his undoing, as he had to disguise the mark. He left his uncle on the floor, placed the key on the window sill, went back in, picked up his Uncle’s gun, shot him through the bruise then walked out the room.”

“So how did he lock the door?”

“He didn’t,” said the Priest. “He pretended to unlock a door that was never locked”

“Aha”, said Mycroft, “but you told us it was a locked room mystery. Strictly speaking it was not.”

“That, then, is the impossibility to which I referred, the one none of you suspected from a man of the cloth. I lied to you.”

Kevin Thornton hopes one day to write the ultimate Locked Room mystery. This is not yet it, but it is closer than the one before. He lives in Fort McMurray.
Father Brown humor humour Kevin Thronton murder mystery Sherlock Holmes Summer Shorts