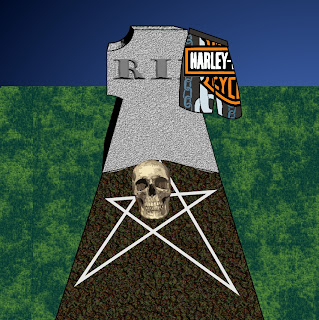 Viper watched the woman slip between the cemetery gates. He had been waiting for a long time, ever since he figured things out.

He had memories of her babbling to the moon and waving a wand around on the day he was buried. A year ago today. And he was still here. Well, tonight she was going to fix it so he could leave.

His girlfriend had taken his Rolex before they slammed his coffin lid shut. To remember him by, she told the undertaker. Greedy bitch. But, it didn’t matter. For some reason, he knew things, dumb things, like times and dates. It was June 21st, about ten o’clock and just getting dark.

The moon was three-quarters full and waxing – another stupid thing he knew, and who cared whether the moon was coming or going? June 21st was important to witches, though. This one’s name was Lily. Too bad he was dead because he liked big blondes.

He watched Lily drag a heavy sports bag behind her and set up an altar on a table gravestone. It was time to introduce himself.

Lily shivered and glanced up from her preparations. The silhouettes of branches waved in the warm breeze, and the outlines of granite markers stretched out in front of her. She heard the faint rattle of chains.

A shadow detached from a tall monument and the rattling sound grew louder. Lily’s heart slammed against her ribs as the shadow drifted closer. When the shape of a man appeared in front of her altar, she screamed and gripped her wand tighter.

“Who are you?” Her voice came out as a squeak.

He wore a sleeveless leather vest with multiple chains holding the front edges together, and a Hells Angels patch on the chest. A black bandana covered his head. Colourful tattoos of naked women and dragons snaked up his arms, and red licks of flame curled around his neck.

“I have a knife.” She picked up her ceremonial two-edged dagger. If she ran, she might make it to the gates. Could she actually use the dagger if he caught her?

The biker laughed. “I’m dead already, Lil. I’ve been waiting for you to come back and fix your screw-up.” His mirth faded as he read the title of the book on the altar: Magic for Newbies.

If this was a ghost, Lily decided she could just pack up and leave. The dead couldn’t hurt you. “Why do you think it’s my fault you’re – ah – earth bound?”

“I died, I’m still here, and you were standing in that spot this time last year chanting witchy stuff. I heard you.”

“How do I know you’re really a ghost? This might be some kind of joke.” For the first time, she was sorry she had left the coven in a huff and set up as a solitary practitioner. Backup would be helpful right now.

Viper folded his arms and moved closer. “See this do-rag on my head? The mortician used it to hide the hole where I hit an overpass bridge doing a buck thirty. I can take it off and let you look. Or, you can try and stab me with your sissy blade.”

Lily decided against either of these options. “Okay, I believe you. I don’t think I’m responsible, but I’ll try and help. Give me a minute.”

She consulted her manual, and then busied herself preparing a batch of Spirit Portal Incense from cinnamon, lavender and wormwood. Hopping over to a recent burial, she grabbed a handful of loose earth. Just for good measure.

Viper stood with arms crossed, watching closely. He was making her nervous, and that made her chatty. “You know, this ritual should really be performed on Halloween when the veil between worlds is the thinnest. Today is the Summer Solstice, time for new forms of life …”

“I ain’t waiting until Halloween. By dawn, I aim to be riding a brand new Harley with straight pipes and all the chrome St. Peter can rustle up. I’m going to ride with my bros. Forever.”

Lily glanced up at him worriedly. “The afterlife may not be what you think. Our energy merges with the elements — earth, fire, water, and air …”

“Bullshit, Lil. I don’t want to hear any of that New Age crap. Let’s get this over with.”

With a box of salt, Lily drew shapes on the bricked path. Around a pentagram she drew a circle, leaving a narrow opening. “Step through the breach and stand inside the pentagram.”

She poured the incense into a silver bowl and lit it, then set it on the ground beside Viper. She closed the gap in the circle with more salt. “We’re ready to begin.”

Lily raised her arms in the V position. “O, Lady of the Moon, look upon this wretched soul. Grant him passage from this shadowy vale and welcome him into the realm of your blessed elements …”

Viper shifted as the smoking bowl vibrated, then tipped, spilling its contents over his feet. Before he could tell her to shut up about the elements, a bright light poured onto him from the sky. He closed his eyes. His body quaked and shivered, and every cell exploded. He was on his way! Soon, he’d see his buddies, Stork and Randy, who fell in a hail of Bandito bullets a couple of years ago.

When he opened his eyes, he was still in the cemetery. Lily stared at him, hand to her mouth. He looked down at himself.

Yeah, somehow, he was going to kill her.

Lily watched as the little – something – kicked the salt aside and staggered drunkenly towards her. It reached back over its shoulder and straightened a tattered wing, then fluttered up to her altar. It was naked and black as tar all over. Maybe she shouldn’t have dropped that handful of earth from the grave into the Incense.

A choking noise came from the tiny body. “Ptui!”

Lily scarcely breathed as it coughed up a black wad that hit the ground with a wet thud.

“Graveyard dirt don’t taste so good,” stated the being. A flame shot from one clawed hand and ignited a nearby bush. The next instant, a stream of water spurted from the other claw and extinguished the fire. “Cool.”

It turned and blew the marble angel right off a tombstone fifty yards away. “Alright!”

“Well, babe, you really screwed up this time.” The elemental creature stretched its slit of a mouth into a leer. “Guess I’ll be staying with you for a while. I hope you’re a Sons of Anarchy fan.” 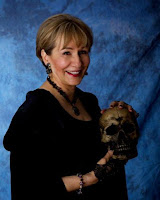 A former technical writer, Gloria’s first paranormal mystery, Cheat the Hangman, won the 2012 Bony Blithe Award for best light mystery. Corpse Flower will be published this year and she is working on a sequel. She occasionally writes a short story or novella just for the heck of it.