An Imajin Qwickies™ Sci-fi/Romantic Suspense Novella with a dose of Campbell Humor
(Campbell humor is nothing to be scoffed at... laughed at, but not scoffed.)

It isn't easy running your own bar in the final frontier...especially when you’re hiding a secret.
(If it was easy, Melodie wouldn't be writing about it.)

Nell Romana loves two things: running The Blue Angel Bar, and Dalamar, a notorious modern-day knight for hire. Too bad he doesn't know she is actually a spy working undercover for the Federation.
(Doesn't know yet... will he? You'll just have to read to find out.)
The bar is a magnet for all sorts of thirsty frontier types, and some of them don’t have civilized manners. That’s no problem for Dalamar, who is built like a warlord and keeps everyone in line. But when he is called away on a routine job, Nell uncovers a rebel plot to overthrow the Federation. Her cover blown, she has to act fast and alone—and more than their love is put to the test.
(Like I said, if it was easy, Melodie wouldn't be writing about it.) 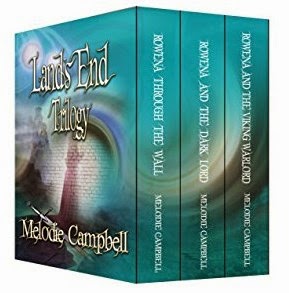 If you're read the Land's End Trilogy, you know Melodie Campbell throws everything but the kitchen sink at her heroine and that's only left out because they don't have indoor plumbing.

If you've read the award-winning Goddaughter series, you know that Melodie knows her way around comic capers.

Now she's gone into space. The galaxy will never be the same again.


Follow Melodie Campbell on Amazon and don't miss a book!