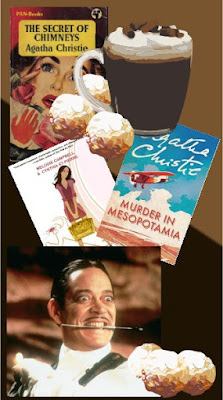 Blame it on Christie
By Melodie Campbell

Okay, I admit it.  Along with coffee, dark chocolate, and foreign men named Raoul, I have an addiction.

I’m a sucker for the “You won’t guess the ending” Whodunit.

I blame Agatha Christie for this addiction.  She is also to blame for a lot of eleven-year-old sleepless nights, as well as my father’s near heart attack in 1970 when I announced at the dinner table, “I know thirteen ways to poison people and not get caught.”

Christie was indeed the Queen of Plot.  After an appetizer of Nancy Drew, I whipped through Poirot, Marple, and Tommy and Tuppence in less than two years. Then I moved on to Sayers, Allingham, Marsh and any traditional mysteries I could get my hands on.

Why?  It’s the chess game.  The sheer bliss of pitting my mind against the author’s to see if I can guess the killer before the story’s detective.

To this day, I relish a book that plays fair, leaves me the clues, and stumps me at the end.

So it’s no surprise that my ninth published book, co-written with good friend Cynthia St-Pierre, is a traditional whodunit. 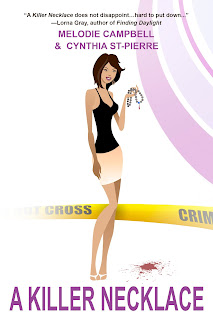 Welcome, A KILLER NECKLACE, which hit the Amazon.ca mystery Top 100 bestseller list on its day of release!

It appears we are not alone in loving that killer surprise ending.

My favorite lines from the reviews posted thus far?

“The pacing is sharp, quick and very funny, a good combination for a mystery that is hard to put down. But the special ingredient is an ending I sure didn’t see coming.”

THAT is what we set out to do.  THAT is the kind of book that makes me smile and gives me chills.

Like a classic “You won’t guess the ending” whodunit?  See if you can guess the killer in A KILLER NECKLACE.

Jewelry was something Gina knew about, just as she knew about fashion. What’s more, she knew about the women who had real jewelry…how they behaved. What they thought. How they felt about it.  So there was one question that still haunted her. Yes, they had found Louisa’s sapphire and diamond necklace. But where was all the other stuff? 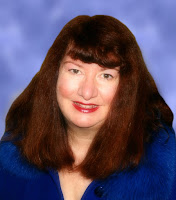 Melodie Campbell is an award-winning author of 40 short stories and 9 novels, including A Purse to Die For, co-written with Cynthia St-Pierre.  Melodie has won 10 awards for fiction, including the 2014 Derringer (US) and Arthur Ellis (Canada) and is the Executive Director of Crime Writers of Canada.
You can follow Melodie at www.melodiecampbell.com