Travels with My Family Part 1 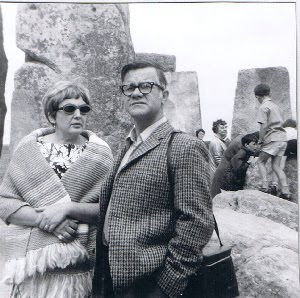 That's my mother and father in the picture on the left. I'm not sure who took the picture. I suppose it was me, age eleven or twelve.

It's a photo that can't be taken anymore.

We are at Stonehenge. I have no idea whose kids are climbing over the stones in the background, but moments earlier or later they could have been my sister and I.

Can't do that anymore.

I completely understand the need to limit access to the site in order to preserve it, but I'm a little sorry that my own children will never get to climb over the fallen pillars, pretend to sacrifice each other on the central slab, or look with wonder -- up close and personal -- at the standing stones.

I think this was the first trip that I started taking my own photos. The camera case on my father's shoulder was a Super 8 movie camera. I don't think the movies survived the passage of time. I know I don't have anything to view them on. My photos are still in their albums, on the shelf, where I can easily pull them down to show my kids. . . the closest they'll get to Stonehenge.
family memoirs Stonehenge travel