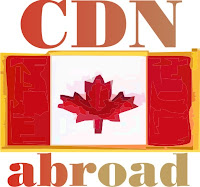 I've been doing design work for Crime Writers of Canada. I had a lot of fun coming up with icons for Cool Canadian Crime. Then this week I was doing provincial icons for  Author Events. (BTW, if you sign up for the free subscription of CCC you get Author Events too.)

It turned out I only needed two provincial icons for the March issue, but I also needed one for out of the country. (We have a snowbird author who doesn't just sit on the beach in Florida she gets out and does readings and signings at local bookstores.) So I needed another image.

What is the image of Canadians abroad? A flag patch, of course.

There was a time when American travellers would sew Canadian flags to their packs because Canadians were more welcome around the world. I never sewed a flag to my pack, or shoulder or anything else. No point. When I had to sew patches (back when I was a Girl Guide) they didn't stay on long. However, I have experienced the difference it makes when you announce you're a Canadian abroad.

Canadians don't carry around the same political baggage that Americans do. We are known, rightly or not, as being more polite and more open to other cultures than our neighbours across the border.

Of course, sometimes you find someone who says there is no difference between Americans and Canadians. I only had that happen to me once. He was a rather nice looking fellow from Glasgow who, up until then, had been successfully flirting with me.

Fortunately I had my wits about me that day. I asked my attractive new friend how he'd like it if I said there was no difference between the Scots and the English. He apologized immediately and our international accord blossomed.

Unfortunately, ours was but a shipboard romance. In fact we met on a ferry so our romance was very short. On another cruise, this time out of Acapulco, I had another opportunity for cultural exchange. 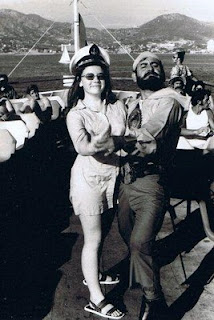 A Canadian, a broad.