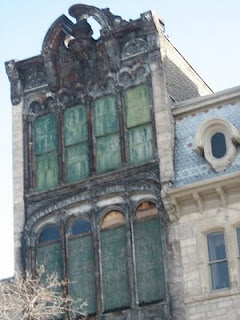 Some things really capture your imagination. For me, the "Mortar and Pestle Building" (shown left) is one of those things.

I'm not sure what the real name of the building is... if it has one. I call it the "Mortar and Pestle Building" because of the distinctive architectural detail on the top. The pestle is gone but the mortar remains, reminding us that this building was built for a pharmacy.


Burnt out and boarded up, it still exudes a certain tarnished elegance. I imagine what it would have been like in its heyday. With its pale limestone, intricate stone work, and arched windows it would have looked like a wedding cake.

Nostalgia doesn't grip me for long. This would also have been the time when women were struggling for the vote, infant mortality was high and World War I loomed.

Instead, I let my imagination go into the near future when someone with some money to invest and the insight to know that the downtown is about to be revitalized, restores the old facade and rebuilds the interior so that it meets the needs of the future and the aesthetics of a time gone by. In my fictional future, that person is Joe Garrett. 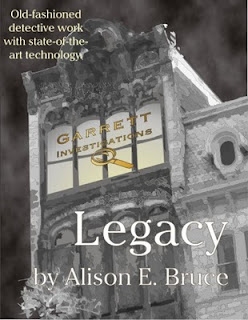 Retired cop turned private detective, Joe invests his insurance payoff in the building, going into partnership with the restaurant owner who occupies the ground floor. With his ex-wife working for the City, Joe knows that new development  is coming to the downtown core and their investment has a good chance of paying off. The rents from the offices take care of expenses when the P.I. business is slow.

So, if you're walking through downtown Guelph, check out the "Mortar and Pestle Building" (minus the pestle, mind you) and imagine the diner on the ground floor refurbished and the boarded windows above glowing in the twilight. The middle floors may be dark  but chances are there will be a light in the window of Garrett Investigations.