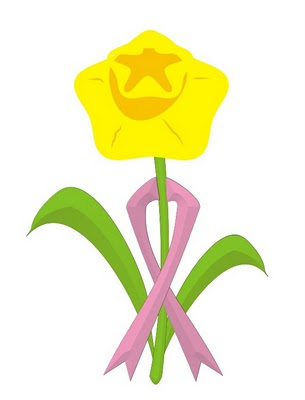 I can't believe that I've got over half way through April without seeing someone selling daffodils for the Cancer Society.

Worse, it took my second cousin, Terralynn, to remind me via Facebook. This might be the first year in my memory that this has happened.

When I was growing up my mother drove and helped fund raise for the Cancer Society. She would describe the old-before-their-time patients, still smoking despite lung and throat cancer -- some puffing cigarettes out of their tracheotomy holes. They never stopped smoking and neither did she.

Mum would quit periodically -- once for eighteen months -- then stress would drive her back. It was a shock, but no surprise, when she was diagnosed with aggressive small cell lung cancer.

Dad quit. He was visiting a friend in hospital. His friend was coughing up blood and trying to cadge a cigarette at the same time. My father says he threw his pack in the garbage on the way out of the hospital. He never smoked again.

He still got cancer - a malignant tumor on his kidney. He also had COPD from his years of smoking and second hand smoke from my mother.

My sister didn't smoke. She died of breast cancer after it metastasized and started attacking her bones.   Greg, Terralynn's father, never smoked as far as I know. Neither of them did anything to bring cancer upon themselves.

I doubt there is anyone who can say that they have not lost a friend or family member to Cancer. Can it be beaten? We can only hope and support those who work toward that end.