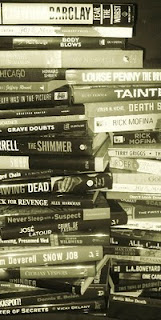 Why are mystery novels so popular?

A writer, a creative writing teacher and a high school science teacher meet at a party... No punch line, just a fascinating discussion on why mystery novels are so popular. Our conclusion? The classic story arc is the culprit.

Robert Heinlein once described humans as a rationalizing species. Terry Pratchett went one step further to call us storytelling animals. History began when we started writing those stories down. Whether we were describing the last hunt or trying to make sense of why the wind blows and the sun comes up every morning, we told stories with a beginning, a middle and an end. Life is open-ended and often inexplicable. Stories are not. Or they weren't.

Modern literature is often as open-ended, inexplicable and grim as life itself.

Science fiction can be even darker since it's deeper purpose is to comment on life today by extrapolating elements into the future, or by transplanting our problems onto a different planet and alien species.

A good mystery guarantees satisfaction by the end of the book. Mysteries may involve gruesome murders or other violent crimes, but you know that by the end of the book you will know who did it, as well as how and why. They follow the classic - even prehistoric - pattern of having a story arc with allies and enemies of the hero revealing themselves in the course of the tale. There may be twists and misdirection, but at the end, the reader goes "Ah-hah!" not "Huh?" (Not unlike a good joke which is another form of classic storytelling.)

I used to read a lot of Science Fiction as a teen and in my twenties. My mother, on the other hand, never went closer to SF than Star Trek.  That at least proposed a positive future. "If I want to be depressed, I read the newspaper," she'd say. Now that I've reached the age she was when she made that statement, I completely understand her point of view.

I enjoy being challenged by a book. I don't mind reading about explicit sex or violence or graphic forensic content (so long as it isn't gratuitous - that's just bad writing). But I do want the story I'm reading to work out and make sense by the end - a good mystery does that and challenges me to solve the case along with the detective. If I wanted to be frustrated, I'd read the news.

The books in the photo were from the stack of best novel entries for the 2010 Arthur Ellis Awards. Information about the 2011 Arthur Ellis Awards for excellence in Canadian crime writing will be going up soon on crimewriterscanada.com/awards/arthur-ellis-awards.
crime fiction history literature mystery philosophy storytelling