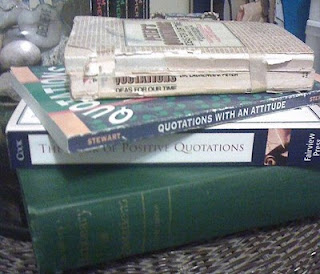 "I love quotations because it is a joy to find thoughts one might have, beautifully expressed with much authority by someone recognized wiser than oneself."  ~Marlene Dietrich

Some people collect stamps. Others collect coins or comic books. I collect quotes.*


I have two editions of Oxford Quotations, one of Bartlett’s, plus a half dozen more specialized books of quotations including my favourite which is falling apart. Then there are my notebooks and files.
My collection started when I was in my teens. I started a scrapbook of quotes, comic strips and scraps of poetry – some of which was my own. The first passage in the book is:

“This above all: to thine own self be true, and it must follow, as the night the day, thou canst not then be false to any man.”

That line from Hamlet imprinted itself upon me years before I actually saw the play (unless you count the musical version on Gilligan’s Island). When I finally saw Hamlet on the stage, I already knew most of the dialogue from quotations and excerpts. (I also found myself want to hum along to the key speeches.)

There are several quotes from Robert Heinlein's Notebooks of Lazarus Long in my collection. I discovered SF in my teens thanks to my science lab partner. He gave me Podkayne of Mars for Christmas. In the way that teens often go off the deep end about something, I practically became a disciple of RAH. Fortunately he didn't lead my naive soul astray. Only one quote bit me in the ass.

"The more you love, the more you can love — and the more intensely you love. Nor is there any limit on how many you can love. If a person had time enough, he could love all of that majority who are decent and just."

It took me years to understand that this did not mean that your boyfriend could ignore you in favour of your female friends. On the flip side, Heinlein had the perfect line to get me through the angst of that later ex-boyfriend making out with my best friend, then my younger sister's best friend.

"When the fox gnaws, smile." 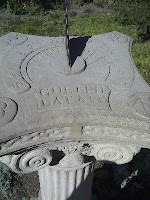 
"Always do right. This will gratify some people and astonish the rest."

The above is one of the life lessons I try to teach my children, along with being who you are, keeping a positive attitude and letting them know that it is possible for me to love both of them with all my heart. I'm a firm believer in doing what is right for its own sake, but I'm not above wanting to confound others as I do it.

Mark Twain is also the source of another passage that I always try to keep in mind, though rarely quote because it's too long and my memory isn't what it used to be...

"Twenty years from now you will be more disappointed by the things that you didn't do than by the ones you did do. So throw off the bowlines. Sail away from the safe harbor. Catch the trade winds in your sails. Explore. Dream. Discover."

Or as they said in Rome, Carpe Diem!

*Washington is attributed with say "I cannot tell a lie..." Well, I can tell a lie, but what's the point? I don't just collect quotes. I also collect coins and stamps in a haphazard fashion and I have about ten thousand comic books - bagged, boarded and filed - in my basement.
Mark Twain memoirs memory philosophy quotes Robert Hienlien William Shakespeare