Fame and Fortuna: A Page-a-Day

on October 24, 2010
I'm in the midst of editing El Paso Trail for the Text Novel Contest and editing Ghost Writer for my CWC Mentor; I have three newsletters to produce and other contract work coming in. So, how do I spend my day off? Planning for NaNoWriMo and trying out One Page Per Day.

This November, I'm going to write the sequel to El Paso Trail, a mystery/romance set in the old west. The working title is Fortuna and it will start something like this... 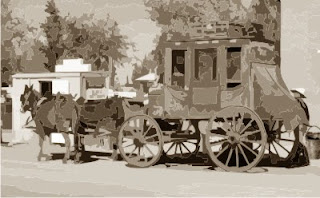 Fortuna Chapter 1
The stage coach jolted to a stop, brought up short by the hastily reined in horses. A horrible wet sound cut through the panting of the horses, swearing of the outrider and the general hubbub of spectators.

The outrider jumped down and ran around to the door of the coach, opened it, and pulled down the steps. A gloved hand appeared, followed by neatly turned ankle clad in a short jean boot the exact colour of the chocolate brown trim on her perfectly tailored rose pink travelling suit.

The young ladies in the assembled crowd sighed with awe even as the young men gave a collective gasp of appreciation for the beauty of the young woman.

This couldn't be the new teacher.

An older woman stepped down. Her mature beauty and similar attire, in dove grey and black, suggested that she was the young woman's mother. They were probably traveling through to California.

A bucket appeared at the door of the coach next. The outrider took it and handed it off to an unwary bystander.

A clean and polished, but worn leather boot poked out followed by an ungloved hand that the outrider took firmly. The owner of hand and foot was a pleasant looking woman who might even be quite pretty when she wasn't pale and shaky, She gave the outrider a wan smile as he released her hand, then smoothed out the creases in her buff skirt and straightened the cuffs of her bottle green jacket. Where the other women had reticules that matched the trim on their suits, she had a worn leather courier bag.

This must be the new teacher.

The crowd waited expectantly for two young children to descend from the coach, for the teacher was a widow with two daughters.

Mr Chet Winters, was not misled. His discerning eye saw that the less fashionable lady's clothes were of equal quality and tailoring to the other ladies. He went directly to the older woman and offered his hand.

The matron inclined her head in a regal nod.

"You would be Mr Winters, the banker and head of the school board," she said, proving that she too was able to put the clues together.

"Indeed, ma'am. And these are your lovely daughters Morgan and Caitlin - a little older than we expected. Nonetheless, on behalf of the Town and School Board of Fortuna, welcome."

Almost a year ago he had been tricked into accepting the badge from Texas Ranger Jase Strachan. The former marshal, a dude named Strothers, had been murdered and the Ranger had acted as town marshal until the murder was solved.

Birke had been pulled into the situation because he made the mistake of standing up for the Ranger's young deputy, Marly Landers. As he suspected at the time, Marly was a girl, not a boy. Now she was Marly Strachan and, as far as he knew, she still had the Ranger's badge she had been awarded for her part in catching Strothers' killer.

had escaped, but two of his cohorts had been captured. They hadn't been aware of the murder plan, but they conspired to assault Strachan and Landers. They had been given a year's parole, bonded by the best friend of the deceased, Mister Matt Egan. Now, one of those fellas, Jed McKinley, was his deputy. The other, Tom Tyson, was a thorn in his side.

"Jed," Birke said, elbowing his deputy in the ribs, "go fetch a cup of water for Miss Reardon. She looks like she could use it. Better hurry."

He split his attention between Tyson and Miss Reardon, ready to step in if either gave him cause for intervention. If he hadn't needed to make sure Tyson didn't cause trouble as he had promised, Birke would have offered Miss Reardon his arm, maybe lead her to a seat in the shade and sit with her till her colour returned.

Instead, Jed rushed forward in time to catch her as she wavered. He took her elbow, led her to the bench outside and received her gratitude for the cool water.