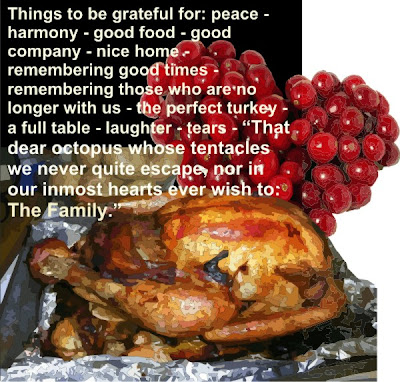 The bread is drying in a bowl. Soon I'll saute the giblets with leeks and mushrooms, un-case the farmers' market sausage and chop fresh sage. While I mix up the dressing, concoct a vegetarian stuffing for my niece's roast pepper, and prep what ever else I can prep ahead of time, I'll probably catch up on TV shows I've missed during the week.

This is my ritual the evening before Thanksgiving and Christmas when my kids are with their Dad. Which brings me to the first thing I always give thanks for every Thanksgiving: my family.

When I was growing up, we always had Thanksgiving and Easter at our home in Toronto, and Christmas at my aunt and uncle's in Montreal (well, Beaconsfield actually). We were a close knit family on my mother's side.

On my father's side, he had one sibling living - my Aunt Ruth - but she didn't have kids. We always visited on holidays but generally only stayed over in the summer when my sister and I could run off our energy in the fields on her farm. My cousin Arlene, my one other close paternal relation, was married when I was a toddler and didn't have children until I was old enough to babysit. We became closer later in life.

By the time my sister and I started having kids, we had stopped regularly making the trip to Montreal - then Ottawa - for holidays. For one thing, most of my cousins also had kids and many were coming in from out of town too. Visiting before or after the holidays is more practical now. We started getting together at our parents' for holiday meals, or at my sister Joanne's.

The last family meal we had with Mum was Thanksgiving 1999. She was as well as she had been in months and able to enjoy her meal since she had stopped taking chemotherapy. A couple of weeks later, she admitted herself into hospital. She died within the week.

Now I think on it, the last holiday meal we had with my sister was also Thanksgiving. We set up the table so that Joanne could sit at it from the hospital bed in her living room. Her condition was already deteriorating, but it was a happy Thanksgiving. We were grateful that she was still with us.

The following year I hosted my first Thanksgiving meal. I had been doing most of the cooking for the last few, but this time we were spending the holiday in my home. This was also the first year my daughter Kate got involved with the cooking. Since then she has been baking bread, making the pumpkin pies and generally creating mayhem and delight in the kitchen. We joke that when she moves out, I'll be the one that needs the housewarming gifts since most of the bake-ware belongs to her.

Although we didn't get together with my aunt and uncle for the holiday meal, we still called and chatted. The phone would get passed around so everyone could say hello. Thanksgiving was the last time I talked to Aunt Yang. We often emailed or called each other at other times, but that fall was busy for some reason and it was November before we knew it. I was thinking I should call and instead I got the call. My aunt had passed away in the night.

Now, at this point, you might think that I should have developed an antipathy to Thanksgiving. At the very least, I should be wondering what shoe might fall next. It's still my favourite holiday.

I am grateful that I roast a damned fine bird (and that the traditional meal isn't roast beef which I suck at).

Speaking of the bird, I have one waiting to be dressed for the occasion.