Deck the Hall with Holiday Mysteries 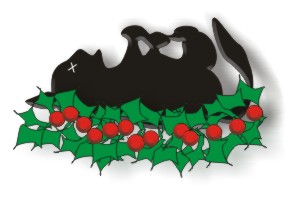 “I thought we agreed, no holiday songs in .”

“We agreed no holiday music in ,” Kate said, hanging fresh holly over the last window. “I didn’t think that included me singing.”

“Well it does,” said Carmedy, scowling at her.

She turned and her eyes were large and luminous; her lips were pulled down in an expression of wounded sorrow.

“Or it should,” he temporized.

Her lips quivering, she managed a sad smile.

But I got you to laugh, Kate thought. These days, that’s victory enough.

Things had been pretty grim around of Carmedy & Garrett Investigations – with good reason. A month ago, Joe Garrett had been killed. Jake Carmedy lost his business partner, but Kate had lost her father. He owned the majority share of Garrett Investigations. By the terms of his will, Kate and Carmedy became equal partners. She took a leave of absence from the City Police Services to involve herself in the business.

She knew Carmedy disapproved of her decision. He only told her once or twice a day. She thought that adding the ‘Carmedy &’ to ‘Garrett Investigations’ would help. Instead, he complained about tampering with the company identity.

But that was yesterday’s news. Kate was determined to reduce the tension between them. She knew she wasn’t finished grieving, but she was tired of being sad all the time and walking on eggs around Carmedy was getting old.

Irritated, Jake watched her hang holly over the door to the lobby. She was supposed to be working on the annual report, a tedious job that used to be Jake’s. The report, which probably would never get read, had to be filed with City Police Services by December 31, but since Jake planned to be out of between Christmas Eve and New Year, he wanted it delivered by December 23 and he wanted to check it first.

Failure to report could lead to them losing the certification that allowed them to be contracted by as investigative consultants. Since a sizable chunk of the agency’s income came from police contracts, they couldn’t afford to miss the deadline and Jake didn’t want to miss his family Christmas.

“How’s the report going?” he asked, hoping the question would nudge her back to work.

“It’s going,” she said, looking around the room and checking her handiwork. “I’m making coffee. Want some?”

He looked at the half empty bottle of flat cola on his desk.

“I’ll make you a café au lait,” she prompted.

He didn’t want to encourage her, but she did make a delicious café au lait.

“Yes, please.” Then, hoping he sounded generous, not concerned he said, “I could help you finish the annual report.”

She stiffened. He had offended her. Damn.

He was so tired of having to walk on eggs around her.

“Then how about if I take your turn at the stakeout tonight?”

She laughed and he was amazed, not for the first time, how quickly she could shift moods. Must be the red hair.

“Miss prowling around in the cold and damp? No way!”

Their current client was a neighbourhood association. The case had come to them via Igor Thorsen, the City’s Chief of Detectives. Someone was maliciously poisoning neighbourhood cats with cyanide-dipped pub darts, then leaving the bodies at their owners’ front door. Disturbing as it was, Police Services did not have the time or manpower to pursue the case. Carmedy & Garrett Investigations was referred. Since the cats were always attacked at night, they had been taking turns staking out the area with one or more of the residents.

She handed him his café au lait with something close to a condescending smile.

He nodded. That’s what he needed to hear.

She picked up the paper bag and climbed on top of her desk.

“What the hell?”  Carmedy yelped.

She pulled out a bunch of fresh mistletoe, wired into a ball and tied with a red ribbon. Carefully stepping over her keyboard and police-standard BlueBerry, she hung the ball between their desks. For a moment, Jake hoped that she’d jump off the desk into his arms. That would place them both under the kissing plant. Instead she backed down the way she came.

“Before you tell me it’s unprofessional to have mistletoe in , the plant was originally hung to bring peace.”

Continued next week, or read the whole story at:
http://www.textnovel.com/story/The-Christmas-Cat-Killer-Caper/2323