Like many Star Trek clubs, we were into role-playing. At parties, parades and fund-raising events, we'd dress-up and act in character. This is how I learned my first lesson.

Clothes DO make the Klingon.

They say "Don't judge a book by its cover." Tell that to marketing professionals in the publishing business. The fact is covers are an important tool for discovering what's inside. Costumes take it one step further. They influence what's inside.

Mild-mannered, soft-spoken people can become rude and boisterous with the simple application of a bumpy forehead and a uniform. If they've taken the time to learn some Klingon words, the transformation is nearly complete. Similarly, a rowdy preteen can put on a pair of pointy ears and pencil his eyebrows and become a calm Vulcan. (Maybe I'll buy my son some ears.)

Power-suits are given that name for a reason. Wear red and/or black and you will appear - and likely act - more confident. Dark blue makes us seem more trustworthy. Soft colours make us look and feel more approachable. Uniforms define form as well as function. We dress to blend in or stand out but always we make a statement about who we are and how we expect people to take us at that moment -- even when the message is "I don't care."

Whatever else you do, you can improve the world around you.
Star Trek clubs are primarily run for the entertainment of their members - or should be. If you're not having fun dressing up in costume and acting like someone you're not (or not quite) why bother? That doesn't mean we weren't a credit to the uniform.
The Guelph Star Trek Club collected food for the Food Bank and the Welcome Drop-In Centre in an annual drive we called "Guinan's Goodies". For the "Spock's Socks" drive, we collected clothing and bedding for disaster relief. (It started off with just socks because the doctor delivering the goods couldn't take bulky items.)
When I managed a comic book store, I ran the annual charity auction with the store owner. When I left, I kept the auction going with Star Trek collectibles for the club. Proceeds went to Action Read Family Literacy Centre plus either St Joseph's Hospital or the University of Guelph Arboretum.
Our club was hardly unique. Most Star Trek clubs do stuff for charity. Nor are Trekkies the only costumed do-gooders. Think Shriners. 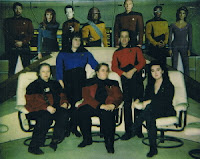 Every commander needs a good crew.

You need a healthy ego to be a leader. That means being willing to share the power and kudos.

I was chatting with a new friend and discovered a mutual interest in Star Trek. She mentioned that her daughter had been photographed on the bridge of the Enterprise at a convention. A couple of questions later, I revealed with pride, "We built that!"

As I quickly assured her, when I said "we" I didn't mean "me". Our captain at the time, Frank Orlando, spearheaded that project for Stone Road Mall, and was the artist that created the trompe l'oile effects. He and his crew put in long hours in construction and painting. Meanwhile, as first officer, I kept the administration end of the club going and led the team doing the club's display for the event.

When I took over as captain, I had my own invaluable first officer in Frances Peate (now Nunn) literally my right-hand woman in the above photo. Amanda Bloss (now Maloney) took the role of Ship's Counsellor (that's her on the left). Neil Arnold (who is also the Klingon above) and Janet were two more of many stalwart officers that kept the club going. (The officers in the background are just standing in.)

As it is in a Star Trek club, so it is in the board room or task group. I couldn't have, and wouldn't have wanted to do it alone. 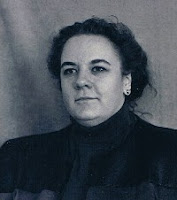 Captain Alison Bruce, commanding the USS Welfen NCC 9011, began her career as an acting ensign aboard the USS Schrodinger. Before transferring Star Fleet Academy, she was part of an unplanned exchange aboard a Klingon war ship. Her experience led to advance training and  deployment to the USS Welfen during its shakedown cruise. After the sudden and mysterious disappearance of the Welfen's second captain, Bruce took command in time for the Dominion Wars.