The Trail to Under A Texas Star - Part 1 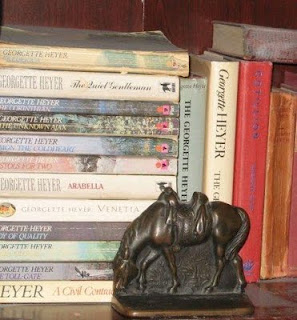 Under A Texas Star will be released next month by Imajin Books, but it's origins are practically ancient history.

My mother introduced me to Georgette Heyer when I was twelve. My father countered by giving me Louis L'Amour and Zane Grey to read.

Add to that my parent's extensive collection of classic mystery authors from Agatha Christie to Rex Stout, it should be no surprise that the first novel I completed was a mystery/romance set in the old west.

I started the story that would become Under A Texas Star - many years ago now - when I was recovering from surgery. I couldn't hold up a book to read, but I could hold a pen and prop my clipboard on my tray table. I needed something to distract me from the woman in the bed beside me. She made noises, nonstop, 24/7. When she was asleep during the day, she snored. In the evening, the night terrors started. Did I feel sorry for her? Of course. Was she driving me crazy? Absolutely!

Since I couldn't do anything for or about my neighbour, I escaped into another world. A few years earlier it might have been set on another planet. A few years later, when I was immersed in the Guelph Star Trek Club, I might have been fan fiction. At the time I was filling in my Louis L'Amour collection and had just discovered Bordertown on TV. So, I wrote a western.

As you might imagine, that first draft was sketchy and almost illegible. Opiates do not make for lucid thinking or accurate fine motor control. However, when I got home, I had another week off for recovery when I could decipher and expand on my scribbles. Finally, I let a my roommate and a couple of close friends read it.

My friend John said it was too short - he wanted more.

My friend Nancy said it had potential and did I have a spelling dictionary because I really needed it.

My roommate Amanda pulled out her red pen and covered that first printout with so much ink it looked like the pages were bleeding.

A novel was born.