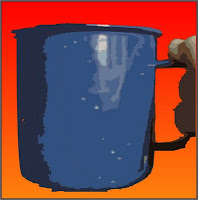 The Good, the Bad and the "You call that coffee?"

Evidently, every episode of Sienfeld had a Superman figurine somewhere. Everything I write has coffee. As I write this, I am drinking Free Trade coffee (whole bean, ground by myself and french pressed) out of the tin mug on the left and listening to that old classic: "Let's have Another Cup of Coffee" (the Glenn Miller version).

One of my favourite family memories is dawn on Tybee Island. It was the last holiday with my mother - taken after she recovered from her first course of chemotherapy. Mum, my sister and I were sitting on the hotel deck, sipping coffee in Styrofoam cups, watching the sun come up over the Atlantic.

I remember the first time I drank coffee and liked it. I was twenty-one, living in a cold, damp house in Drayton Valley, Alberta, with six other members of Katimavik (a Canadian youth program). I think it was Pierre that brewed the coffee, camp style, in a pot on the stove. It had a kick like a mule, but it cut though the damp and cold like a shot of single malt.

Before that, I was strictly a tea drinker. I attribute my being a late bloomer to my mother who made terrible coffee. It was either instant (shudder) or too weak. When I was going to Ryerson, I'd often get a ride downtown when my Dad took Mum to work. Mum and Dad would have instant coffee for the trip. I'd have tea. Sometimes Dad would give me his coffee by mistake - he couldn't tell the difference between my tea and his weak instant coffee. I could, but usually I'd check too late.


One of the many things I miss about my sister is that she could consistently make a great cup of coffee. Drip, press or espresso, Joanne never missed. I can't say the same. For one thing, there are mornings I need a cup of coffee before I can trust myself to make a cup of coffee.

It's all grist (or beans) for the mill as you can see in the following excerpt from Under A Texas Star. On the trail, Marly takes the first watch...


Just past midnight, Jase woke to the smell of coffee. As he stretched, Marly glanced up from the book and gave him a warm smile.

Coffee, company and that smile sure beats waking up alone, he thought.

Then he tasted the coffee. Good God.

He didn't mean to be rude. The expression on his face was a natural reflex.

"It's not very good," she admitted, "but if you sip it slowly, I guarantee you won't fall asleep."


Under A Texas Star
by Alison Bruce, Imajin Books
www.imajinbooks.com
Now available at Amazon Kindle Store and Smashwords for only $3.99.
Trade paperback and other ebook retailers coming soon.
twitter.com/alisonebruce