The Trail to Under A Texas Star - Part 3 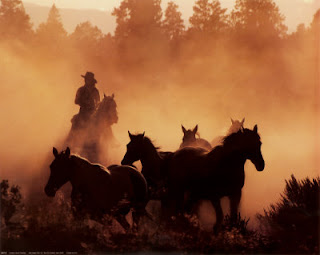 Getting Back on the Horse


You have heard the old adage: "Write what you know." I will freely admit I am not, nor have ever been, a cowboy, a Texas Ranger or a war orphan. However, like Marly Landers, I have fallen off a horse and got back on - in more ways than one.

In the most literal sense, Marly's first riding lesson borrows heavily on my own.

I love riding horses except for a few small details. I'm short and they are tall. I get dizzy being that high up assuming I can get up on the horse at all. The one and only time I took a riding lesson, I hoisted myself up into the saddle and fell off the other side. I eventually made it into the saddle with the help of a chair - Marly uses a fence.

Once I was in the saddle, I did remarkably well for a first-timer. It was terrifying and exhilarating. I was pretty good at getting the horse to go where I wanted him to go - but he went so fast. He wanted to trot when I would have been comfortable with a speed more suitable for a funeral procession.

The other impediment to my riding career was my allergies. By the time I dismounted, I could hardly breath. The itchy eyes and throat I could handle, but my asthma had me to the point where I thought my next stop might be the hospital.

For several years, I gave up fiction writing in order to make a living and take care of my family. I was slowly but surely building a career as a copywriter, editor and web designer when everything fell apart. Within a month, my mother was diagnosed with aggressive, small-cell lung cancer; my sister found out she had breast cancer; and they found a malignant tumour on one of my father's kidneys.

By the end of the year, my mother had died, I was pregnant with my second child and my marriage was falling apart. The following year, my sister almost died of complications after her cancer started attacking her bones. Shortly after that, my father had a massive stroke. Meanwhile, I was the oldest extant member of a postpartum depression group. It got me out of the house once a week and included free babysitting.

It was when I was taking care of my sister and her kids so she could be at home, that I finally got back on the horse. My sister Joanne arranged time so I could write. She strong-armed our Dad into not making demands on me during those periods.

I not only wrote, but I started submitting my writing - unsuccessfully at first - and joined Crime Writers of Canada in order to network with other authors. I entered contests, sucked up criticism and kept getting back on the horse.