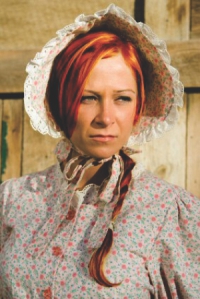 Except that her dress is too new-looking, the model for Marly isn't a bad match. She's not too neat or too glamorous, and thanks to a little tweaking, she has the right coloured hair.

When I was ten, I was one of the tallest kids in my class. I reached my full five-foot-two stature by the time I was twelve. Times were different. My mother used to tell me, "Don't start a fight, but if you get into one, end it." By that she didn't mean walk away and report to a teacher. She meant win. My father - ever protective of his two daughters - taught us how to defend ourselves. My mother expected us to stand up, not only for ourselves, but the smaller and weaker kids.

As a result, I became something of a school yard vigilante, stepping between bullies and their prey. Even if the bully was bigger and stronger than me, I didn't back down. That got me a few bruises but no detentions as far as I can remember. Different times. 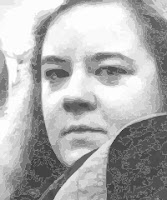 The tomboy who was tough enough to stand up to the big boys and had enough adolescent hormones running through her system to also be attracted to those boys, she's one of the inspirations for Marly Landers.

By high school, I'd gone from being one of the tallest kids in my class to being one of the shortest. I stayed five-foot-two (eyes of blue) until my doctor announced last fall that I was five-foot-one-and-a-half. Fortunately my negotiation skills improved because I didn't stop standing up for the underdog. There is one scene in Under A Texas Star that comes directly from personal experience. I got into a play-fight with my then boy friend. He had got my arm in a twist and was trying to force me to back down.

"If you're trying to break my arm," I said, "you're not being very efficient."

You'll have to read the book to see where that fits in with Marly, but like my boyfriend Dan, Marly's opponent backed down once he realized what he was doing.

The red hair, slight frame, and incredible endurance is all Marly. The stubborn streak and tenacity she gets from me.

If you haven't already, check out the Character Sketch for Jase Strachan.

Under A Texas Star is now available in paperback at
Amazon.com and on sale in eBook format at Amazon.com
and Smashwords. (See Summer Sizzlers Sale)
Alison Bruce characters childhood Marly Landers Under A Texas Star