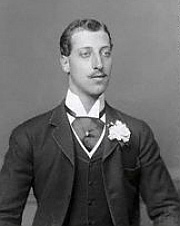 Fred
When other teenage girls were dreaming of a rich and/or famous and/or handsome husband, I dreamed of having my own butler. I wrote a story about him once. He would bring me tea and toast in the morning, make sure my clothes were clean and pressed, oversee the house and grounds keeping staff, be quietly in love with me, willing to stand up to me, and loyal to the death.

Movies like My Man Godfrey (and an intense dislike of house work) inspired my creation of the perfect butler/valet/lover. He was further influenced by a myriad of characters from Batman’s Alfred to Wooster’s Jeeves with a touch of Yoda for good measure.

In my dream cast, he might be played by the properly English Ralph Fiennes or Canadian Hugh Dillon. As a young man, he might have resembled one of the Saxe-Cobourg princes (like Albert Victor above). Fred’s past is murky and involves a violent crime which forced him to leave England and make his way in America.

In Under A Texas Star, Fred is the very model of a gentleman’s gentleman. Unfailingly polite, of service without being servile, he manages Jezebel and her staff with a velvet-covered iron rod. He has known Jase Strachan since he was a young, wounded soldier, rescued by Jezebel while escaping Richmond. A decade later, he still refers to the Texas Ranger as Master Jason and treats him accordingly.

“Sir?” Fred pointed to a chair.

“I can shave myself.”

“Please, sir. I've seen what happens when you shave yourself.”

Marly sputtered on a mouthful of milk.

Jase grumbled something unintelligible and sat down.

“As we well know, Master Jason, a moustache does not become you.”

“That was years ago.”

Marly watched in fascination as Fred lathered Jase's whiskers. Despite Jase's protests, the moustache was the first to go.

To Marly, Fred becomes a mentor and father figure. He helps her maintain her masquerade as well as teaching her useful skills like how to shave a man and how to make a decent pot of coffee.

As promised, Fred came over to the office so Marly could do the evening patrol. All was quiet and the chore was quickly accomplished. When she returned, Fred set out a sweet plate, then taught her how to make drip coffee.

"You might have better luck with this than the modern percolator from the office," he said.

After checking on her prisoners and making sure the back door was firmly locked, she put her rifle on the rack. Fred insisted that she take the more comfortable chair behind the marshal's desk.

When he had poured the coffee and trimmed the wick of the lantern, he sat opposite her and nibbled on a biscuit.

"Nothing is going on in town tonight," she said. "The only ones left are the hardened gamblers and the quiet drinkers. I might end up bringing in one or two of the drunks if the night gets cold."

"Any trouble they cause will be amongst themselves and over before I can do anything."

"You learn quickly. You and Marshal Strachan make a good team. But for two things, I would have your appointment as the town's lawmen become permanent."

"One, neither of you would accept the appointment," Fred said.

She shook her head, bemused. It was difficult to shake the feeling that in his terribly stiff English way he was laughing at her.

"I suspect I know what you are thinking," he said. "If I have learned nothing else, I've learned that age does not always bring wisdom. Nor has my experience supported the idea that there is a weaker sex. I hear you've learned to play chess. Would you like a game?"

She suspected the game had already started.

All that and breakfast brought to me each morning? I still dream of having my own “Fred”.


Under A Texas Star is available in paperback at Amazon.ca, Amazon.com and Barnes and Noble on sale in eBook format at Amazon.com , Amazon.uk and Smashwords.