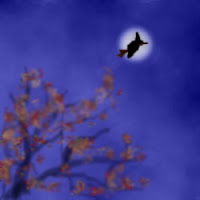 Shadows dance across the trees,
of things that you can not see.
The feeling of an evil power,
beware, it's now the witching hour.
From the Witching Hour by Makala Shay

The midnight hour is almost upon me as I write this. My kids are snug in their beds with dream of Snicker Bars and Cheetos dancing in their heads. Somewhere, Linus is waiting for the Great Pumpkin. I'm contemplating the turning of the year.

In Celtic tradition, this is new year's eve. The old year has seen its harvest. The seeds of the new year are sewn in the frost. Winter isn't the death of the year, it's the gestation period before Spring is reborn.

Hallowed Evening is the crossroads and anything is possible at the crossroads. That's where ghosts of loved ones appear and demons can break through. Most of our Hallowe'en traditions stem from tricking or appeasing demons and evil spirits.

Ghosts have haunted me in the past. The ghost of my mother-in-law was the scariest - but only because her son was so sick and seeing ghosts under such circumstances is a little worrying. The ghost of my friend Allen was a comfort. I was at his funeral at the time and I felt he was satisfied. The first ghost I ever saw was my grandmother. I was six or seven at the time. She came to say good bye. When my mother told me the next morning that Grandma had died in the night, I already knew.

The Witching Hour is upon me.

Some say the Witching Hour is three in the morning. That's the Devil's Hour. (I read somewhere that more people commit suicide at 3 am than any other time. All I know is that if I wake up at three, I have a devil of a time getting back to sleep.) Officially it's November 1. Generally I don't have a problem with midnight being the end of the day. Hallowe'en is different. The new day (and new year) awaits the dawn. Until then (and making allowances for the fact that I'm technically agnostic):


From ghoulies and ghosties
And long-leggedy beasties
And things that go bump in the night,
Good Lord, deliver us!