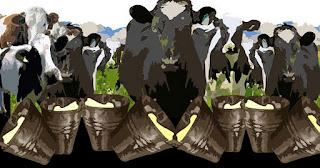 On the eighth day of Christmas...

On the eighth day of Christmas My True Love gave to me
Eight maids a milking...

This morning I received a note from my ex. He had the nerve to be calling me up for bail money. He was caught attempting to cattle rustle dairy cows. He had rounded up seven Holstiens and a Jersey from Mennonite farms in the next county. His reasoning was that Mennonites would turn the other cheek.

Right. They're peaceful, not stupid. They notified the police and had him arrested blitzschnell.

I tried not to laugh until after I got off the phone. Naturally, I didn't go bail him out. I don't know who did, but he managed to dump a half ton of cow manure on my lawn while I was out mailing cards. Fortunately, my neighbour (not the one who complained about the birds) is a member of the local garden club.

Next year they want him to dump horse shit. Nothing better for roses.
12 days of Christmas Christmas humour