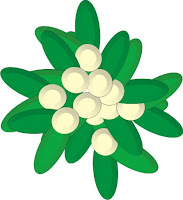 And then, because I'm no saint and I wouldn't mind an ereader or tablet under the tree. I have a backlog of ebooks to read.