The Bear at the Door 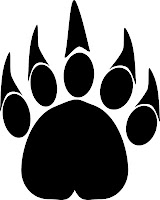 For years I had a recurring dream about a bear chasing me. I'd escape into a cabin, then have to hold it off by leaning against the door. In a variation on the theme, I'd go to the door and find a bear there and have to lock the door before it got in.

Being deeply interested in symbolism, I looked up the bear in dreams. One source said, if you dream of a bear trying to break into your house, you feel like you're under attack. (D'uh!)

Later I found out that "A young woman who dreams of a bear will have a threatening rival or some misfortune." (10,000 Dream Interpretations, by Gustavus Hindman Miller) Does that mean that I stopped having the dream because bears only visit young women?

When my cousin Lesley gave me a beaded necklace with a bear claw design, I felt the need to jog my memory about bear symbolism.

In every nature-based culture that I have come across, the bear is a symbol of strength, protection and fierceness. In Norse mythology, the bear was an aspect of Odin. The Norse and Celts saw the bear as a warrior and wore bear skins into battle. In Greek mythology, bears are associated with Artemis, the Huntress.

In Native American traditions, the bear is a symbol of leadership and power. The she-bear is both a healer and a hunter; protector and warrior. Perhaps all those bear dreams were my spirit guide trying to get my attention.

I went back and looked at dream meanings again.

"In a positive sense a bear represents an inner force of power and strength ready to be used. For instance, dreaming of a bear could mean that your dormant powers are being gathered in preparation. And when you need to act, you can be amazed by the forces you have at your disposal." (Dream-Land, http://www.dream-land.info)

That fits with how my life has been unfolding. I have a bad habit of underestimating myself so, when the time comes to act, I often amaze myself. Whether it's defending myself from would-be rapists or enduring the slings and arrows that life deals out, the bear within has been there for me. Next time she shows up at my dream door, I'll let her in.