on August 13, 2012
I just had my first interview anxiety dream. I've been expecting it for years.

Close your eyes and picture this.


It was supposed to be a studio interview before a small audience. Three local Imajin authors were being interviewed: Melodie Campbell, who used to do standup comedy; Catherine Astolfo, former principal and experienced public speaker; and me.

For reasons that can only be attributed to Murphy (or the fact that it was my dream) I was on first.

I was taken behind a curtain to a set dressed as a haunted house, told to lie down, but also keep my chin up for the camera. When the curtain opened, I was to get out of bed and put a large robe on... because of course I was in a nightshirt all of a sudden.

The curtain opens. The audience is huge. I grabbed the robe and it gets tangled on something. I have to engage in a tug of war before I get it loose, then I can't tell which way is up.

"Times like this, I am reminded of Maxwell Smart."

Someone helps me into the robe. I step out on stage. No host to interview me. Fine, I think, I can do this. I already made them laugh.


I woke up just as I was about to wow the crowd.  So unfair. Here's what I was going to say...

I'm Alison Bruce, author of Under A Texas Star and Deadly Legacy. My stories have been described as "complex and sophisticated," "fast-paced," and "well-researched."

Under A Texas Star was inspired by Louis L'Amour's westerns, Georgette Heyer's historical romances and Shakespeare's As You Like It. It has a feisty heroine, ruggedly handsome hero, adventure, mystery and romance.

But don't take my word for it. Pick it up and read it yourself, because it's ... 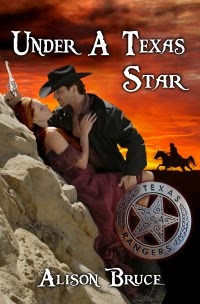 Available at:
Amazon.com
Amazon.co.uk
Amazon.de and other European sites
anxiety As You Like It dreams Georgette Heyer humor humour Imajin Books interviews Louis L'Amour Under A Texas Star