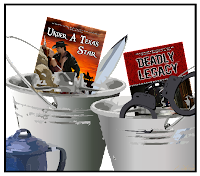 Someone is apparently beating up a board outside my window. My son tells me it's the sound of a nail gun. Something is being built, not beat up. Work In Progress.

It's been a busy week. I finished one project, promoted Under A Texas Star, and hung out at a three-day Twitter Party for Imajin Books. My son came home from New Brunswick Wednesday - meaning a half day spent picking him up from the airport - and will be heading out to Music Camp Sunday. That will mean a half day or more on the road driving him there.

Today was to be my day to relax. Instead, the erratic staccato of the nail gun is fighting with the constant drumming of random story ideas in my head. When I try to focus on one, another jostles it out of the way.

On days like this, I want to be able to empty my mind onto a tray and sort it out. In this compartment, material for Deadly Season. In that compartment, material for Fortuna's Star. Over there, a catchall for the random ideas that are not yet attached to a story. I have files set up that way on my computer and accordion folders for hard copies related to each story. Why can't I organize my brain that way? 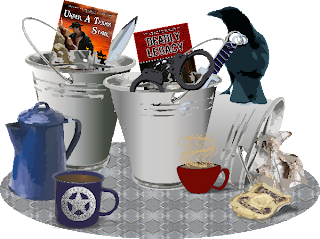