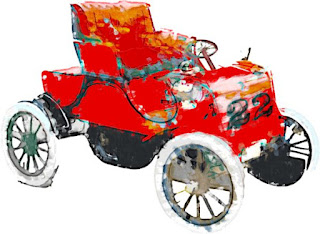 A funny thing happened on the way to Word on the Street... I didn't make it.

I had packed my books and bumph the night before. The bag was waiting at the top of the stairs. My travel mug was in the car. The car's tank was full.

After several attempts, I picked out the perfect outfit. Since this was a similar outfit to the one I wear at almost every book event I do, one might wonder what took me so long.  I applied my Stephanie Plum ego enhancer (eyeliner and a swipe of mascara) and was ready to go.

The car started, but it wouldn't leave first gear. With a sigh, I killed the engine and slipped it into second before starting it again. On cold damp mornings, my car, like me, doesn't want to get in gear.

I had to kill the engine and restart at the next two lights. For some reason, the transmission shifts just fine when the car isn't running. Usually, by the second light, the car has warmed up enough not to be a problem. This time I had to stop and start over at the third intersection and then when I stopped for coffee (which I badly needed by then). That's when I noticed my right headlight was out.

When I reached Highway 6, I went north instead of south. This led me away from the freeway and on my way to Canadian Tire. An hour and a half later I was ready to give up on Toronto. Now I only had an hour to make an hour and a half drive -- if I was lucky. While I was calling in my regrets, I was told my car was ready.

The broken headlight was fixed and it didn't cost as much as expected.

I waited for the boom to fall.

"We couldn't find anything wrong with my transmission. I'm not saying there's nothing wrong, but it's working now."

I left thinking that I should have toughed it out and kept driving. I could have been shilling books by now. Then I started the car and put it in gear. There was nothing wrong. The clutch point had changed, but I could get used to that. With buoyant spirits and a stick shift that was no long stuck, I headed home.

Naturally, I bemoaned missing Word on the Street. I was looking forward to seeing friends and colleagues I rarely see in person. I hoped to sell a few books, chat up a few prospective readers, maybe network with a reporter.

Then it started to rain.

My car was finally fixed. I was dry and relatively warm. It all turned out for the best.