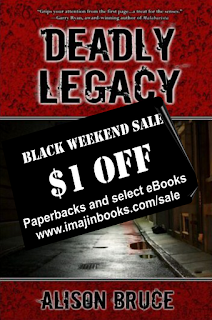 Chief of Detectives Igor Thorsen looked over the incidence reports for the weekend and sighed. The Black Friday/Cyber Monday weekend - also known as American Thanksgiving - was always busy. You'd think with all the sales on, people wouldn't bother with robbery. It didn't help that it was almost the full moon. In addition to the INNOCENT LITTLE CRIMES (by C. S. Lakin), the crazies came out of the woodwork. It was enough for a pantheist like himself to call on DIVINE INTERVENTION, in the hopes of DIVINE JUSTICE (by Cheryl Kaye Tardif).

Speaking of the divine, one of his crazier reports was of a guy shouting "METATRON: THE ANGEL HAS RISEN" (by Laurence St. John) and a woman swearing she saw an ancient Egyptian named ASENATH (by Anna Patricio). He would have like to have seen the Viking appear along with ROWENA THROUGH THE WALL (by Melodie Campbell), but was glad he wasn't around for the guy who complained of hearing WHALE SONG (by Cheryl Kaye Tardif) and could he get the police to tell them to be quiet.

One report that looked loony turned out to be art theft. LANCELOT'S LADY (by Cherish D'Angelo) was stolen from a downtown gallery along with CHILDREN OF THE FOG (by Cheryl Kaye Tardif), and a diptych called SOUL AND SHADOW/ FIRE AND SHADOW (by Susan J. McLeod). Some out of town PI named HUDSON CATALINA (by Linda Merlino) was already on the case.

And of course there was murder. THE BRIDGEMAN (by Catherine Astolfo) was found down THE RIVER (by Cheryl Kaye Tardif) near an inn called SAFE HARBOR (by Rosemary McCracken). As usual, his detectives were turning up SKELETONS IN THE CLOSET (by Cheryl Kaye Tardif). A LEGACY (by Catherine Astolfo) was involved - no doubt a DEADLY LEGACY (by Alison Bruce).