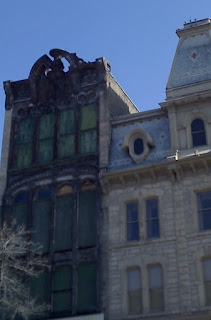 When I started writing Deadly Legacy, I was living in downtown Guelph. At the intersection of Wyndham and Macdonell (pronounced mac-doh-nell in Guelph) there's this creepy old building that I absolutely adore. It's the Petrie Building and is - or should be - a heritage site. Unfortunately, no one will put the money into it to restore it - or even make it usable

I decided that Joe Garrett and Papa Filandros would do that. It's not a big part of the story, but it speaks to the kind of person that Joe was - and is one of the many reasons he's a hard act for his daughter Kate to follow.

A couple of years ago I was staying at the Weston Harbour Castle in Toronto for a conference. The hotel is built on landfill, which explains why the Harbour Authority Building is a couple of blocks inland. 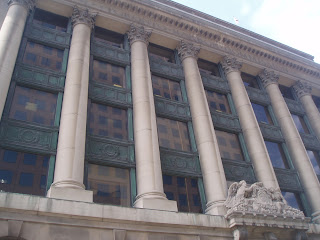 This is another building I fell in love with.

When I was designing The City's downtown, I decided to incorporate the Harbour Authority's architecture into that of the Justice and Emergency Services Building.

Again, it's not a big part of the book. Kate mentions the neo-classic facade on her way in one day. Except that the picture gets used in the book trailer, no one would know... except me.

By having concrete places in mind (marble and brick too) it's easier to maintain continuity. When I send Kate's partner Jake on a drunken ramble, I know where he's been and what he's seen, even though the geography is only loosely based on Guelph and owes details to Toronto (where I grew up) and other cities I have visited. 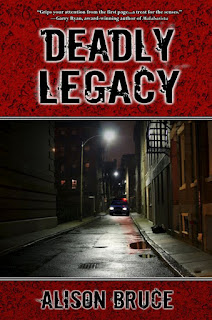 DEADLY LEGACY
Even in the future, the past can kill you.

FREE ON KINDLE NOVEMBER 1-3
On Amazon.com , Amazon.co.uk and other Amazon sites