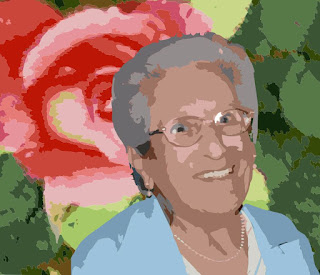 
It’s Rosie’s party and she is elegant and gracious. She no longer remembers names, but her eyes are alight with recognition as she greets each face.

Sometimes her son (my husband) and I wonder what happens inside Our Rosie’s head. She once told us, “It sounds a lot better before I say it.” We surmise that the dementia disconnect is in the communication, not the thought.

Rosie conducts as her sons serenade her with traditional songs, both Christmas and Italian. Years ago, she would have been conducting in a different way. She would have buzzed around, cooking up the entire meal; homemade pasta, salad, and cannoli for dessert. Her personality was forceful. She admitted to being bossy and nosy. She loved good gossip, good wine, and good cards. Right now Rosie would be standing in the kitchen in her apron (by choice), instead of sitting in the wheelchair in her Sunday best.

She hasn’t lost her love for her sons and their spouses and children. She doesn’t recognize the great-greats, but she knows they’re connected. She reaches out to hug and kiss them.

My grandchildren’s eyes are large and shy as they kiss Our Rosie’s cheek, prompted by their parents, and let her squeeze them. She is small and shrunken and silver haired. I wonder if she is scary to them, but they are polite and would never say so. Too bad they didn’t see her when she could whip up a pie or plant vegetables in a huge garden. Wouldn’t it be awesome if we could flash back to the child Rosie or the newly married Rosie and see that face instead?

Her smile makes her beautiful, though, I think. Perhaps that’s the reason Sydney and Evan want to hang around and help deliver leftovers to the staff on the second floor with Gramma Cathy (me). Our Rosie has gone upstairs a little while ago, exhausted from hours of adulation and attention. We gather up plates of sandwiches and veggies and cookies. I lead the parade into the elevator.

I am a bit nervous about what Sydney and Evan will see. Men and women, heads down, tongues hanging, line up in a sleeping row along the wall. One lady twists in her bed, accompanied by a repetitive stream of indecipherable wails. One woman in the hall flaps her hands, drools a smile, la-la-la excitement propelling her tongue when she sees a visitor. They’re so young. Will they be afraid? Repulsed?

When we get to the nurses’ station, we put forward our offering with thanks for their help in making Rosie’s day special. They are as thrilled with Sydney and Evan as they are with the goodies. Since I think my grandkids are the cutest kids in the world, I’m not surprised of course.

Inside Rosie’s room, we discover an empty bed. Her walker and wheelchair deserted. “Where is she?” I wonder aloud and the kids follow me back into the hall. I have a quick rush of panic.

Seconds later, I see my mother-in-law trying to hunch herself onto a small sofa. Her head is at an uncomfortable angle, her legs dangle over the side. She moans, too tired to get up again.

I hurry over to her, four little feet at my heels, and put my arms around her. Once she is upright, I say to Sydney, “Honey, can you get Nona Rose’s walker?”

Sydney doesn’t hesitate. She races back and reappears, her eyes large and determined, not one bit afraid. With the kids’ help, I half-shuffle, half-carry Rose until she is seated backwards on the walker. We return her to her room, where I lower the bed and, with Sydney and Evan’s help again, soon have her lying flat. She is so tired she can barely keep her eyes open. She makes soft noises and mumbles words we can’t understand.

My sister-in-law, Rita, arrives and goes to get a PSW. In the meantime, Sydney and Evan and I gather around Nona’s bed. Her flailing hands grasp the air. My granddaughter reaches for the right, while Evan reaches for the left, and soon Rosie is quiet, breathing smoothly, holding those little hands on both sides.

The PSW appears in the doorway and lowers one side of the bed, in preparation for getting Rosie cleaned up and more comfortable.

Just before we leave, Sydney and Evan lean over and kiss her cheek. No parents watching, no obligation or expectation. No fear or revulsion. Simple, pure kindness and love.


Catherine Astolfo is a past President of Crime Writers of Canada and a Derrick Murdoch Award winner (2012). She was a Zonta Club 2012 Nominee for Women of Achievement.

Writing is Catherine’s passion. She can recall inventing fantasy stories for her classmates in Grade Three. Her short stories and poems have been published in a number of literary Canadian presses. In 2005, she won a Brampton Arts Award. Her short stories won the Bloody Words Short Story Award (second and first) in 2009 and 2010. She won the prestigious Arthur Ellis Best Short Crime Story Award in 2012.

Catherine’s novel series, The Emily Taylor Mysteries, are published by Imajin Books and are optioned for film by Sisbro & Co. Inc.