I Break for Research 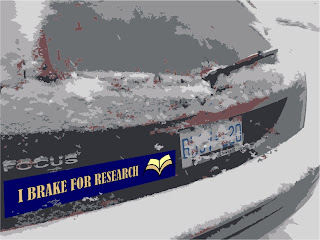 Did you know that calico is a plain woven textile made of unbleached cotton? The cloth would be died bright colours and often printed with a floral pattern. So much printed calico was imported by the United States that Americans now refer to the printed pattern as calico, not the cloth itself.

I didn't need this much information about the fabric. All I needed to know was that calico was being used in America during the Civil War. My character isn't going to get into a discussion about the etymology of the term. (Calico is named for the city in India where it was originally woven - Calicut.) She certainly isn't going to get into a socio-political discussion on the de-industrialization of India during the colonial period. Yet, looking up one little fact led me down that road.

Research is addictive. You look up a textile and end up reading about the history of trade in the British Empire. A couple of months ago, I was looking for a reference about slave quarters and by the time I was done, I was ready for my character to start her own revolution.

A fragment of what I research will end up in my stories. In part, this is because I end up going off on tangents. Mostly, it's because research supports the story like an easel supports a painting. It has to be there, but it's not the focus of attention.

PS: The research did come in handy writing my monthly post for Cowboy Kisses.