A Nice Cup of Tea 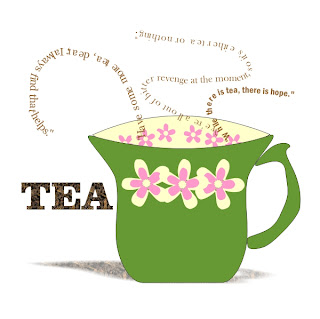 Chorus from A Nice Cup of Tea by Binnie Hale

If you know anything about me, you know I love coffee. Coffee is the fuel that stokes my day. However, I started off life as a tea drinker and I still love a nice cup of tea.

One of my childhood rituals was going to Nana's for breakfast on Saturdays and Sundays. At first it was a very short trip. Nana Nash and Grandma Bruce had rooms in our house. Each had a tiny kitchen (built by my father by splitting a bedroom in half), a sitting room and bedroom. They shared the upstairs bathroom. Nana's kitchen had the window. Later, they moved out, but Nana only went as far as across the road where she had a larger flat in a widow's house.

From toddlers to teens, my sister and I would sit at Nana's kitchen table and have a bowl of fruit followed by tea and toast. When we were younger, we'd stay to watch cartoons on her black and white TV. She'd bring us elevenses - more tea and a snack - before sending us home so she could have her lunch.

Every family dinner, celebration and crisis included tea. Some of my fondest memories and best conversations were held around the table, after dinner, drinking our second or third cups. At family gatherings, making the tea was my job and I kept the pot full. (One of my father's favourite quips was "He was so poor, he didn't have a pot to tea in.")

Until I was in my teens, I had tea in the traditional English way - strong with milk and sugar. Then I had gastric problems and I was told I couldn't have milk or sugar or strong tea. Well, I wasn't going to give up my cuppa, so I learned to like tea weak and clear. (You have your coffee black and your tea clear.)

In high school, tea became my hallmark. I had a spare locker outside the Chem lab I used as a tea pantry. I had mugs hanging on the coat hooks and a travel kettle. In addition to a canister of tea, I also kept containers of sugar and powdered milk for anyone who wanted to adulterate their brew. At lunch I'd put the kettle on in the lab and serve up. The science teacher kept a beaker marked "arsenic" for the occasion.

It wasn't until university that I became a coffee drinker. Ironically, it was because I couldn't get a good cup of tea. At Ryerson, I used to bring my own mug and tea bags and was able to get hot water for free. At University of Guelph, the cost of boiling water was the same as a cup of tea - but the tea was horrible. (Things have changed, by the way. There are more teas available and the rest of the world is catching up with bringing their own mugs - something I've been doing since high school.)

Now I am known for being a coffee drinker. I only have tea in the morning if I'm sick or I'm visiting someone who thinks instant is coffee. On the other hand, "When it's time for bed, there's a lot to be said, for a nice cup of tea."