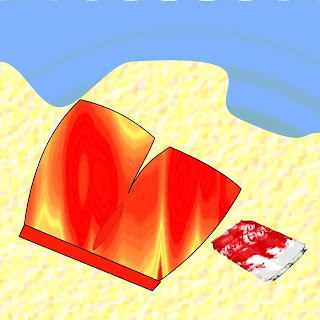 Dev Medina prodded a half buried soft drink can with his big toe while a frothy wave rippled around his bare ankles then receded. What was the matter with people, dropping litter everywhere as if the planet were nothing but a convenient garbage heap? Frowning in disgust, he bent to pick up the can and shook water and sand from it.

He turned and, looking to his left, scanned the grass strip bordering the swath of tawny beach, searching for a trash bin. His gaze bumped into a raucous group of teenagers playing beach volleyball, brushed over an elderly couple strolling along the greenway and a man jogging with his dog at his side. Not seeing what he was looking for, he swung his head to the right and quickly spotted a receptacle. He took a step toward it but stopped, frozen in place, gaze caught by a figure in the distance.

She -- it was a woman, he could tell -- shimmered beneath the hot summer sun, appearing almost ghostly, making him wonder for a moment if she was a mirage created by his tired, squinting eyes. Transfixed, he realized she was no figment of his imagination as she drew closer. She took her time, scuffing at the sand, occasionally tossing her long golden hair over one shoulder and glancing out to sea or up at the gulls flitting here and there across the sky. Her skin matched her hair color, and the sarong draped around her tall form was of the same golden hue splashed with a jungly pattern in darker gold and green.

Suddenly, as if sensing his gaze upon her, she looked his way. Dev stopped breathing for a few seconds. Pulse rocketing skyward, he couldn’t force his eyes to turn away even when she frowned at him. She paused briefly then strode straight toward him, long golden legs making short work of the distance between them. Her frown had turned into a killing glare by the time she halted, not more than six feet away from him.

“It’s rude to stare, mister,” she snapped. “Didn’t your mother ever teach you that?” Pressing pretty pink lips into a thin line, she jammed balled fists onto her hips, hips that were nicely rounded, Dev noticed. He also admired the swell of her breasts, rapidly rising and falling at the moment. She was a picture of feminine indignation, all directed at him.

“She shore did, little lady,” he replied, greatly exaggerating his Texas drawl. Delighted by her furious amber glare, he idly juggled the can he was still holding and grinned. “But I kinda forgot my manners when I saw you come struttin’ along.”

“Strutting!” She dropped her hands to her sides, fingers splayed as if preparing to claw his face. “For your information, I do not strut. And don’t call me ‘little lady’.”

Dropping his good ole boy act, Dev ruefully bowed his head. “Sorry. No insult intended, ma’am, and I apologize for staring. But if you don’t mind me saying so, a beautiful woman like you should be used to admiring stares.” Glancing up, he saw her eyes widen in surprise at his abrupt change of attitude.


A shrill sound ripped Dev from the sunny summer beach. He jackknifed up in bed, not realizing where he was in the dark. Where had she gone, the golden goddess whose name he hadn’t had time to ask?

The harsh ring came again, jarring him fully awake. With a curse on his lips, he reached for the phone on the stand beside his bed, yanking it from the cradle before a third ring sounded.

“Whoa there, pal. Did I interrupt something?”

Todd’s laughter galled Dev, but he held his temper in check. “What’s up? You didn’t call just to heehaw at me, did you?”

“Naw. We’ve got a job and it can’t wait ‘til morning. We need to be airborne in an hour or less, so up and at ‘em, Sunshine. Meet me and the others at the hangar. The chopper will be ready to take off.”

Dropping the phone back on the stand, Dev dressed quickly, gathered up his gear and headed out into the sultry Houston night, wondering where this assignment would take him and the team of oilrig fire fighters – and when he would meet his golden goddess. Meet her he would, without doubt. Dreams like the one he’d had tonight, so graphic in detail, didn’t happen often, but when they did he knew they’d come true sooner or later. In this case, he hoped it would be soon, very soon. 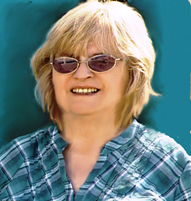 Lyn Horner resides in Fort Worth, Texas with her husband and several very spoiled cats. Trained in the visual arts, Lyn worked as a fashion illustrator and art instructor. After quitting work to raise her children, she took up writing as a creative outlet. This hobby grew into a love of historical research and the crafting of passionate love stories based on that research.

The author says, "Writing a book is much like putting together a really big jigsaw puzzle. It requires endless patience and stubborn determination to see your ideas come to life, and once hooked on the process, you're forever addicted."
beach fiction Lyn Horner sea Summer Shorts western