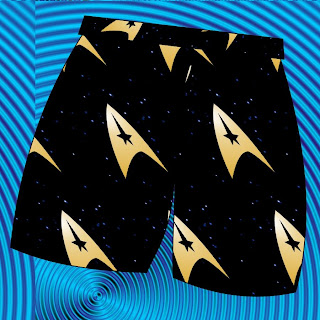 Or how I met your father because of Star Trek

Yes kids, your father and I were Star Trek geeks.

Okay, still are. We used to dress up in Starfleet uniforms and role play...

Yes, I know your dad still does that but he's a vampire now... Or is it a vampire hunter? Spy? Jedi Knight? Look, he's my ex now. You can't expect me to keep track.

See, when we met, I was Captain and he was a Lieutenant. We were fighting the Dominion War (in a manner of speaking) and you know how things are in war time. Okay you don't know. Use your imagination.

He was a tall, handsome redhead. He thought I had the most beautiful green eyes...

Yeah, I know. My eyes are blue. He was a little confused.

Anyway, the war was going badly. The stress of sending people into danger was kinda getting to me - at least that's how your father wrote it in his story. He read it aloud in our writing group and ... ahem, anyway, it was all very romantic even if he did get my eye colour wrong.

Then the war was over. We had a daughter to raise and real jobs and real life. We didn't stop loving each other, but we didn't bring out the best in each other either. He wanted more adventure. I had a ship to run. The Lieutenant became a diplomatic attache with a secret life. The Captain was, and always shall be Captain. In fact, I was just talking to the Chief Engineer about some of the weapon's modifications on the refit.

What? You don't want to know? You want to watch an episode of Supernatural?


In another life, Alison Bruce was captain of the Guelph Star Trek Club - USS Welfen. She lost her captain's jacket but she still has the maternity uniform from when she had to do a costume appearance while pregnant with her first child.

Currently, she is the author of Under A Texas Star, Deadly Legacy and Hazardous Union - the last of which was written with Kat Flannery and is being released by Imajin Books in August 2013.