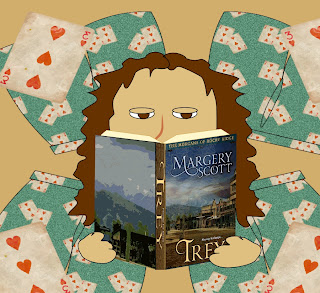 
This scene is the first meet between the hero, Trey Morgan, and the heroine, Claire O’Doyle. Trey won 50% of a saloon in Rocky Ridge, Colorado, in a poker game, and has come back to Rocky Ridge to sell his share to the other partner, expecting it to be Conor O’Doyle, a man he’s known all his life.

Out of the corner of her eye, Claire saw one of her girls, Eliza Baines, approaching. "There's a gentleman wanting to see you," Eliza said, her glance sliding to a tall, dark-haired man leaning against the bar near the door. "I tried to take care of him, but I don't think he wants what I have to offer."

Claire's brows lifted. "Really?" This was the first time any man had turned Eliza down

"He says that's not what he's here for. He has business with the owner."

Claire almost laughed. She'd never met a man who wasn't interested in the pleasure a woman could give him. Claire disliked this part of the business. She wished the ladies who worked for her didn't have to offer themselves to men to survive, but she was well aware that if not for her, they'd be out into the street plying their trade. At least in The Lucky Shamrock, there was safety, a warm bed and a full stomach.

Claire wove her way through the tables, all the while studying the stranger. Clean-shaven, the hint of a cleft in his chin, dark eyes ringed by the longest lashes she'd ever seen on a man. His white shirt had obviously just been laundered, and the dark red brocade vest and black frock coat told her this was no ranch hand. Broad shoulders tapered to a narrow waist and long, lean legs. Altogether, he was a pleasing sight, not at all like most of the men who spent their evenings in her saloon.

She held out her hand as she approached. "I'm Claire O'Doyle. Eliza tells me you’re wanting to speak to me."

"You're not Conor," he said. His gaze slid the length of her.

She squirmed under his scrutiny. "No, I'm not. He passed on seven months ago. I'm his daughter, Claire."

The smile on his face faded, and she wondered if she was imagining the sadness that appeared in his eyes.

"Trey Morgan." His eyes sparkled with good humor as he wrapped his fingers around her hand.

A sudden burst of heat sizzled up her arm. "What can I do for you, Mr. Morgan?"

"Is there somewhere more … private …" he began.

Claire straightened to her full height, which was still several inches shorter than his. "Mr. Morgan, I'm sure Eliza or Betsy would be happy to take care of you—"

What kind of business could this man possible have to discuss with her? She turned and led him through a door at the rear of the saloon and into a small office beside the kitchen. He followed her and closed the door behind him.

Claire's heartbeat fluttered. She reached into the pocket she'd had sewn into her dress, wrapping her hand around the handle of the Derringer she kept there. She'd never had to use it, but there was a first time for everything. And she'd do whatever she had to do to defend herself. "Now, Mr. Morgan. What is it you want?"

"Call me Trey," he said, reaching into his pocket and pulling out the folded piece of paper with Shamus's signature on the bottom. He handed it to her.

Her eyes widened as the words sank into her brain. "What … why … that's nonsense …"

"Oh, it's absolutely true." He grinned, then added, "Partner."


Trey is available in Kindle format on Amazon.com, as a Nook Book at Barnes & Noble and in other eBook formats on Smashwords.

Born on the Scottish borders, Margery now lives on a lake in Canada, but travels as much as possible searching for the perfect setting for her next novel. When she’s not writing, you can usually find her wielding a pair of knitting needles or a pool cue.