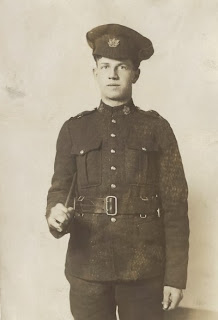 Lost but not Forgotten

Hidden in the back of a closet in the attic of my Aunt Ruth's house was a suitcase. It was found at the last moment of going through the house before putting it up for sale. Inside the suitcase was a mystery. Several mysteries, actually, in the form of photographs of unknown relatives.

Aunt Ruth might have known who they were. Grandma would certainly have known. Neither are with us to provide the answers. It was left to my cousin Arlene and I to piece together the puzzle using what we knew of the family and evidence from later photographs with often cryptic notes scrawled on the back. A work still in progress. 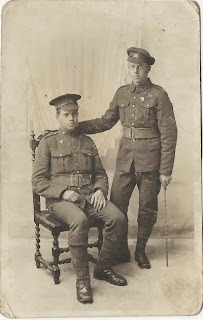 Among the pictures were men in uniform, portraits taken before leaving home for World War I. Thanks to the photographer's mark, we know that home was Manitoba. My great-grandmother, Ida Penfield, took her three sons (Hetley, Albert and Gurnell) west to live on her brother's farm after the death of her husband Robert Lloyd Penfield. She left her daughter, my grandmother, behind. But that's another story.

With the help of a Penfield genealogy page and Archives Canada I discovered that two of Ida's sons served in the Canadian Army. Their cousin Robert Lloyd Penfield also served. (This was a popular name in the family - my father's eldest brother was Robert Lloyd Bruce.)  A Nellie Penfield is also listed, but without attestation papers. Was this Gurnell? 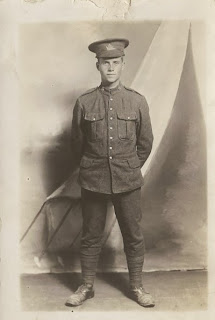 Which of these photos depicts Hetley, Albert, Robert (and possibly Gurnell)? We have no idea. We need more pieces of the puzzle.

We don't know how they fared either. Hetley came back. Arlene met him as a child. Did they all come home? Or do I have great uncles lying in Flanders' fields?

The information is currently lost, but these young men are not forgotten. 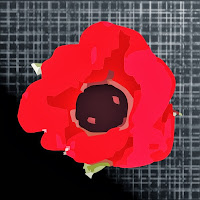 "That's what it takes to be a hero, a little gem of innocence inside you that makes you want to believe that there still exists a right and wrong, that decency will somehow triumph in the end."
Lise Hand