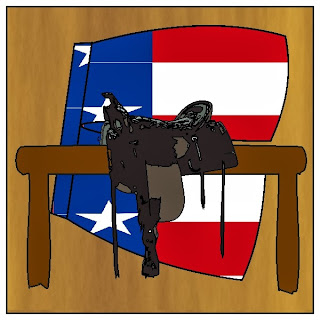 Jessie Devlin Taylor stepped back to admire the dining room table she and her twelve-year-old daughter Nora had just finished arranging. Everything was in place, ready for dinner to be served. Her good china, crystal and silverware gleamed, and a centerpiece of cedar bows decked with red ribbon graced the middle of the linen covered table.

“It does indeed.” Slipping an arm around her gangly daughter, Jessie gave her a light squeeze. She wished her sister Rose and brother-in-law Jack could be here, but Rosie was expecting again, and Jack had insisted they stay home. Considering what a rough ride it was from their Red River plantation, Jessie conceded he was right.

She sighed. “I’d best go see if all’s ready out back.” Her cook, Maria Medina, was roasting venison and turkeys in the cookhouse, while Jessie’s sister-in-law Lil prepared side dishes in the kitchen. Their food preparations were nearly complete. She just wanted to make sure David and her brother Tye had tables set up for the twenty-odd ranch hands from their adjoining ranches who would soon gather here for their Christmas meal.

“Quiet the little ones before they upset your grandda, aye?” she said, hearing children’s shrieks from the parlor.

While Nora hurried across the hall to stop the noise, Jessie headed for the back door. Stepping out into the walled courtyard, she was glad to see two long tables stretching back almost to the cookhouse. Currently the two men were spreading white sheets over the tables they’d constructed out of wooden planks atop saw horses. More planks lay on barrels and crates along both tables, seating for the ranch hands. Fortunately, the day was warm, or the men would have to eat in the bunkhouse, not nearly as festive.

David looked up, saw her and smiled. Leaving Tye to finish spreading the last cloth, he sauntered toward her. Even after all this time his handsome looks and long-legged, manly gait made her heart beat faster.

He draped his arm across her shoulders. “Well, darlin’? Does it pass muster?”

“Aye, it looks fine. Now bring out the box of greens and ribbons, and I’ll lay them out.”

“The boys don’t expect all this fuss, you know. Feed ’em good and they’ll be satisfied.”

“Nonsense! I want them to enjoy their holiday the same as we do.” She tapped his broad chest. “Fetch the box, please.”

“Yes ma’am.” He gave her a quick kiss and went to do her bidding.

Nora stood on the front porch watching for riders. Goshdarn! What was taking Mr. and Mrs. Crawford so long? Uncle Tye and Auntie Lil had come early to help Mama and Daddy get ready. Lil’s parents were to come later with their men, but surely they should be here by now.

She glanced at her brothers and cousins. She’d shooed them outside so Grandda Seamus could nap in his parlor chair. Together with Maria’s younger children, they were playing ring taw, a game she’d once loved but now considered babyish. Crouched around a circle drawn in the dirt, they took turns shooting marbles, trying to knock each other’s marbles out of a small inner circle. Reece was winning, Nora could see from the pile of marbles he’d collected.

A faint thudding sound caught her ear. Shading her eyes, she spotted horsemen in the distance. Finally! Whirling, she ran inside to alert her parents.

“Mama! Daddy! The Crawfords are coming,” she yelled, forgetting about her napping grandfather. At his grumbled complaint, she said, “Sorry, Grandda.”

Aunt Lil stepped out of the kitchen just as Mama walked in the back door.

“Are they here?” both women asked.

“Almost. Should I tell Maria?”

“Aye, and your father and uncle. We’ll be out front.”

Nodding, Nora dashed for the courtyard. “The Crawfords are almost here,” she announced, racing toward the cookhouse.

“What’s your hurry?” her father called.

“I have to tell Maria that Vittorio’s coming.”

“Sí, I heard you, niña,” the tall black-haired woman said. Setting aside the kettle of gravy she’d been stirring, she mopped her sweaty face with her apron and motioned for Nora to lead the way. “Let us go and welcome my son.”

By the time they joined everyone out front, Auntie Lil’s folks were pulling up in their buckboard followed by several riders. Nora had eyes for only one, a slim young cowboy with dusky skin and raven hair. Drawing rein, he gave her a huge smile, a smile she hadn’t seen in three months, since he’d gone to work as a wrangler for the Crawfords and Uncle Tye. Four years older than she was, Vittorio had been her best friend all her life.

She watched him dismount and greet his younger siblings who danced around him like eager puppies. Then it was her turn. Bounding down the porch steps, she launched herself at him. He laughed and caught her, lifting her into a tight hug.

“I suppose I missed you a little bit too.” He winked and whirled her around, making her cry out in joy. Caught up in each other, neither paid a lick of attention to laughter and teasing remarks from their audience of cowboys, family and friends.

On the porch, Jessie shared a smile with Maria, whose husband Luis stood with David and Tye, grinning at Nora and Vittorio’s exuberant reunion. “I think they’re glad to see each other.”

Maria nodded. “Sí, they are each other’s best Christmas gift.”


“Aye, and always will be,” Jessie murmured. She’d seen them together in times to come, and her visions never lied. 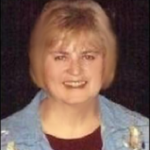 Lyn Horner resides in Texas with her husband and several beloved cats. A former fashion illustrator and art instructor, Lyn took up writing after quitting work to raise her children. She is the author of the award-winning Texas Devlins trilogy which features three psychic siblings, descendants of Irish Celtic Druids.