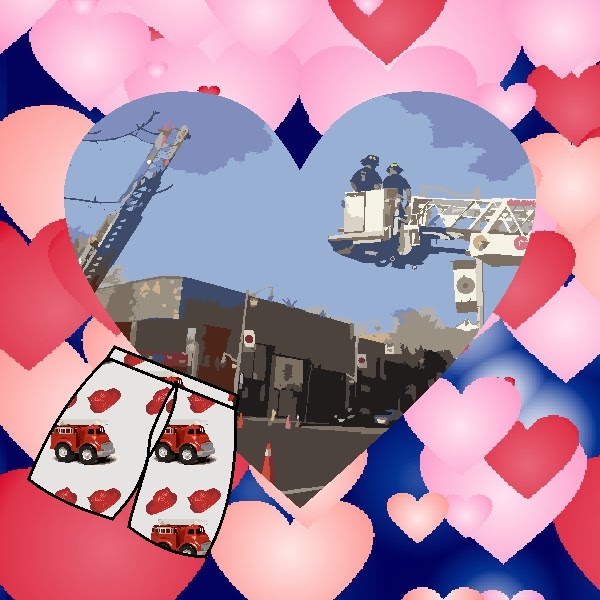 Hillary Johnson clung to the ladder hoisted thirty feet over Main Street as another gust of January wind shrieked through the rungs.

What was I thinking?

She closed her eyes, took a deep breath, and glanced down at the handsome, concerned face gazing up at her. The reason she’d agreed to string lighted hearts over the town of Bellham, Oregon came whirling back to her. Tim Jacobs.

She wanted a chance to work with Tim, to impress him.

“You okay?” Tim hollered. “Wind’s getting pretty fierce. You better come down now.”
Hillary gripped the fire truck ladder tighter. “Yes, I’m okay.” No, I’m not. “I’m almost done.” If I can make myself release the ladder with one hand, so I can finish hanging this last string...

It wasn’t right for a Bellham Fire District firefighter to fear heights, and Hillary was determined to beat her fear.

When the town acquired the Valentine’s decorations, fire chief Darren Holt asked for volunteers to hang them. Tim’s hand shot up with Hillary’s hand only a split second behind. Stupid hand.

And now here she was, clinging to a ladder for dear life, high above the hard, unforgiving blacktop, all because she’d let her heart, instead of her head, control her hand. Stupid heart.

When Tim moved to Bellham three years ago he immediately stole Hillary’s heart. It wasn’t his tall, good looks – although those didn’t hurt any. It was Tim’s calm, quiet confidence that hit her like an arrow from Cupid’s bow.

A month later, Tim joined the fire department. Hillary’s heart – the stupid, blood-pumping muscle responsible for getting her into this terrifying predicament – had flipped cartwheels of joy.

But things hadn’t progressed the way Hillary envisioned. Tim was friendly to her, as he was to everyone, but he didn’t seem to notice her the way she noticed him – with her entire heart and soul.

Now the tables had turned in her favor. Here he was, staring up at her, concerned and worried.

“Only two more hooks to go!” Hillary yelled without looking down. Looking down – with the combination of height, and Tim’s handsome face – made her heart beat dangerously fast.

I have to do this. Prove to Tim I can, and more importantly, prove it to myself. She eased one hand off the ladder and quickly suspended the string of hearts from the second-to-the-last hook.

Another burst of wind howled past, and Hillary grabbed the shuddering ladder with both hands. Panic leaped from her chest into her throat. Mentally she lashed at it, fighting it down.

I can do it. I’m almost done. Stretching trembling fingers overhead, she attempted to attach the hearts to the last hook. But she couldn’t quite reach. I hate being short. She readjusted her grip on the ladder, stood on her toes, and stretched her arm, hand, and fingers as high as possible. A wind gust shook the string of hearts in her hand, rattling her nerves. She gripped the ladder with both hands again, whitening her knuckles.

“I can get that last one if you can’t reach it,” Tim said.

She released the ladder with one hand, stretching and straining to reach the last hook. Half an inch more and she’d have it…a quarter of an inch… She sucked in a breath, expanding her lungs and ribcage for that extra fraction of extension… She slipped the light string over the last hook and wrapped it on tight.

Cautiously, Hillary made her way down the ladder and off the truck until she was standing in the street next to Tim. She looked up at the hearts strung high over Main Street. Her pulse jack hammered with fear and pride.

“Awesome job,” Tim said, cuffing her on the back of her fire turn outs as if she were one of the guys.

“What are you doing later, around three-thirty?”

“We could grab a coffee. Hang around until dusk when the hearts should automatically come on. Check them out in the dark.”

Hillary’s heart fell. It wasn’t a date, it was fire department business.  “Yeah, sure. Okay.”
***

Tim was early. He waited for Hillary on the Main Street sidewalk holding two coffees.
Hillary pulled up. “Hey,” she said.

“Hey, yourself,” Tim said handing her a cup. He looked up. Red, pink, and white hearts swayed and danced in the wind. “They look good, huh?”

Hillary tipped her head back. “They do. I hope they don’t blow away.”

“I think we wrapped the ends tight enough.”

Tim scanned Hillary’s features. She was cute, with a round face, and a small, upturned nose. Her brown hair hung halfway down her back. She wasn’t his usual type. He generally found himself drawn to tall blondes. But there was something about Hillary that kept pulling him in. Today he’d really noticed her. Not just as a fellow firefighter, but as a woman. It was her bravery up there on the ladder with the wind howling all around that did it – really proved what she was made of.

He knew she’d felt afraid. But that’s what courage was all about – doing it despite being scared. Today Hillary had earned his respect.

“It’s been getting dark around four,” Tim said.

“Sounds about right,” Hillary said taking a sip of coffee.

Bellham was famous for its strings of chiming bells over Main Street during the holiday season, making Christmas an extra magical time of year. The lighted hearts affected Tim in a similar way.

“You’re beautiful,” Tim said. “Brave and beautiful.” He bent, touching Hillary’s nose with his. His lips brushed hers. Once. Twice.

Hillary smiled, dimpling one cheek. Her deep blue irises reeled Tim in, drew him closer.
He could see the reflection of the overhead hearts shining back at him in her eyes. 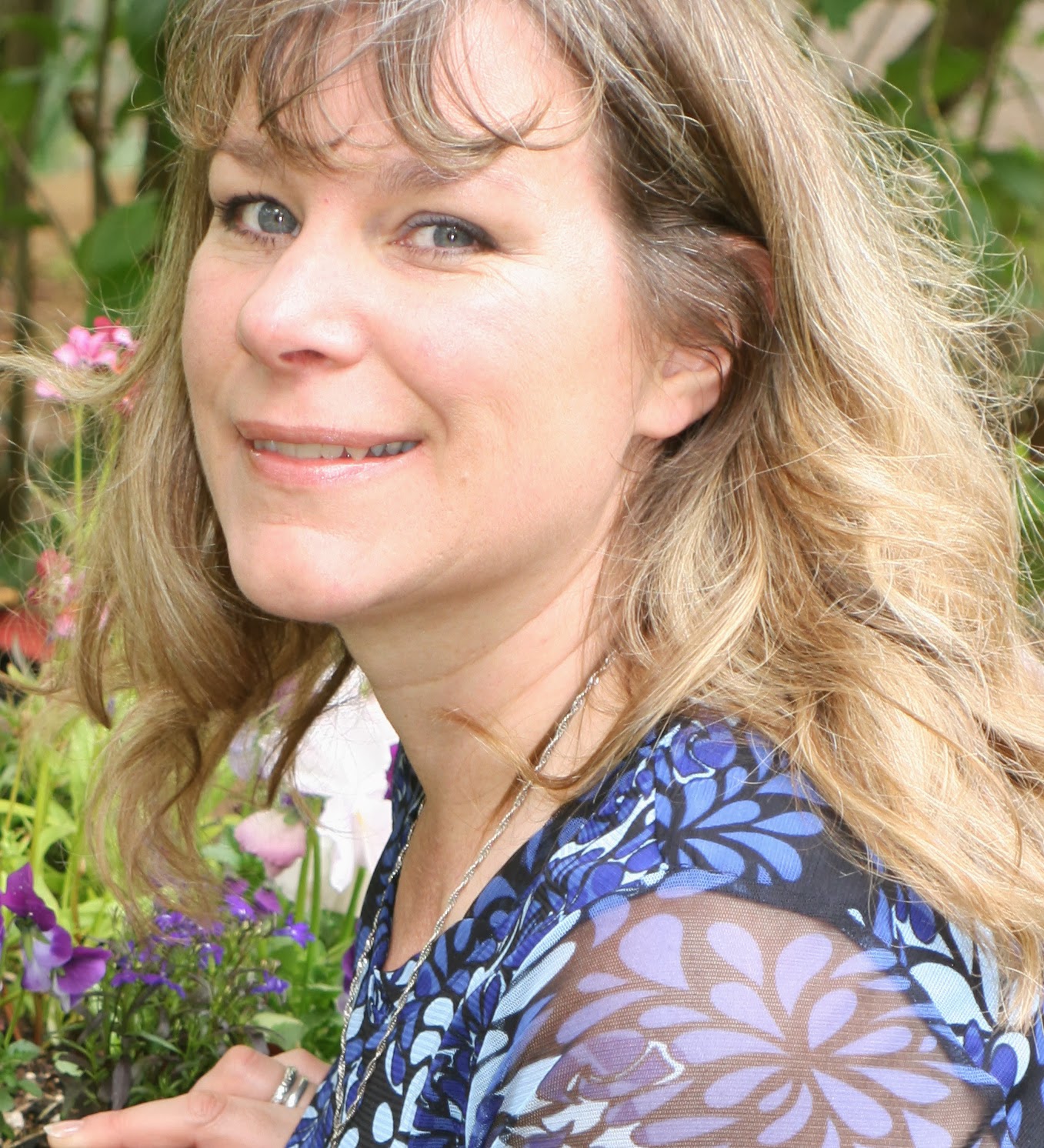 Award-winning writer Danita Cahill lives on a small Oregon farm with her husband, their two sons, a herd of alpacas, and an assortment of other animals. She is writing away on several more projects, including more stories in the Bellham Romance Series.
http://www.amazon.com/Love-First-Click-Bellham-Romance-ebook/dp/B00GH1CWY8/
Bellham fire fighters hearts Holiday Shorts ladders romance Valentines Day