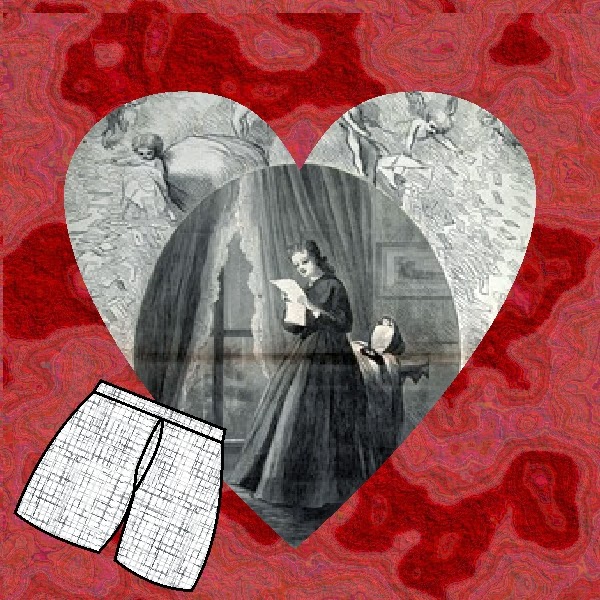 To My Julia
by Lorrie Farrelly

'Mid bugle's blast and cannon's roar,
And 'mid the battles angry flame;
'Mid clashing sabres red with gore,
I fondly breathe thy much-loved name.
I feel thee near at dead of night,
When I my vigil lone am keeping--
Thy image guards me, angel bright,
In dreams when wearied I am sleeping,
Each northward wind wafts on its breath,
To thee a yearning kiss of mine--
On glory's field or bed of death,
I’ll forever be thy Valentine.

Julia Bissonnette had no need to look at the creased billet-doux clutched in her hand; she knew the words by heart. Still, she couldn’t bring herself to tuck the scrap of paper away in her reticule. She cherished it as much as the small velvet case, shiny from much devoted handling, that contained Charles’ portrait and a lock of his russet hair.

She had spent nearly a week traveling from New York to the Union Army hospital on the Hord farm near the Nashville Pike. Now she stood like a small, stubborn rock in the foyer of Elmwood, the main house, a steady flow of blue-clad soldiers, orderlies, physicians, and nurses – the latter carrying bandages and basins, their stained aprons covering somber day dresses – streaming around her.

“I can do this.” Julia steadied herself. “I must do this!” Although she was barely seventeen, she knew boys younger than herself were fighting and dying to preserve the Union. So, squaring her shoulders, she stepped in front of a young officer before he could hurry past her.

“If you please, Lieutenant,” she said, hoping she sounded more confident than she felt. “Would you be kind enough to tell me where I may find Captain Charles Lumandier? I’ve received word he was brought here.”

The harried soldier came to a startled halt, nearly colliding with the slight girl who’d planted herself directly in his path. Although her round, pretty face was pale with fatigue and her navy blue travelling costume was rumpled, she met his eyes with steady resolution. He stammered a bit, trying to recover his wits.

“Well, Miss, there are more’n three hundred wounded billeted here. But if your Captain’s among them, he’ll likely be up on the second floor in the officers’ ward.”

Thanking him, Julia turned and hurried toward the broad staircase.

It took her more than an hour to make her way through the warren of upstairs rooms and hallways crowded with cots, chairs, and trays. Fighting tears, she stopped often to offer a gentle word to the maimed and bandaged men – some of them scarcely more than boys – who called out to her in their pain and loneliness. Some pleaded, “Begging your pardon, Miss, could I trouble you for a minute…?” Others, their frail tethers to life fraying, called her “Sissy,” or “Dearest,” or even “Mama.” Over and over, Julia felt her heart squeeze with pain.

As at last she made her way into a bedroom at the end of the hall, a pair of orderlies quickly approached. They bore a moaning youth on a litter, his discolored arm wrapped in seeping, reeking bandages. As Julia shrank back against the wall to make room for them to pass, she heard a medical officer wearily calling after them.

“Boys,” he said, “tell Major Dawson I said to get that arm off quick as he can; I’m sending the next patient down in ten minutes.”

The doctor stepped away from a cot where a young man lay on a bloodstained sheet. As he opened his eyes, Julia gasped, her hand flying to her mouth to mute her cry.

“Julie?” Charlie whispered raggedly. “Is it … really you? Or am I … dreaming?”

Julia took his trembling hand, bent to kiss him. His skin was hot and dry, his gray-green eyes cloudy and glazed.  She knelt beside his cot, gently stroked his tangled hair from his forehead.

“I’m here, my darling. You didn’t think I’d spend Valentine’s Day without you, did you?”

Charlie stared at her. Then, incredibly, his eyes cleared a bit and he managed a rusty sound that might have been a chuckle. Then, against his will, his eyes burned with unshed tears.

Julia glanced at the sodden bandages wrapped around his leg. She lifted his hand, pressed it to her lips.

“Oh, pooh, Charlie.” Startled at her tone, he stared wide-eyed at her. “You know you always tread on my toes, anyway.” She smiled despite the tears burning her eyes. “Now, I’m going to see that you get well, and then I’m sure we’ll be able to think of plenty to do besides dancing.”

“Ahem.” The doctor returned to the bedside, his face solemn as he nodded to Julia in greeting. “Miss.” He looked at Charlie. “Captain, it’s time to get you downstairs. I’m sorry, son, but that leg has to come off.”

Charles froze, shot a desperate glance to Julia. She squeezed his hand, took a deep breath, got to her feet, faced the doctor. She barely came to his shoulder.

“Doctor, Captain Lumandier is keeping his leg.” She folded her arms stubbornly. “Now, please be so kind as to provide me with soap and fresh water, carbolic acid, and clean bandages soaked in iodine. Oh, and morphine to keep him comfortable.”

The doctor was instantly indignant. Who was this mere slip of a girl to tell him what to do? “Now see here, Miss,” he sputtered, “you cannot just storm in here and…”

“Indeed I can, Doctor, and I have. Now, if you’ll excuse us, the Captain and I have Valentine’s Day plans to make.”

The doctor took another breath as though to argue, then his manner dissolved into grudging respect, even amusement. He signaled to an orderly, indicated Julia. “Corporal, get this young lady whatever supplies she requires.”

The doctor turned away. As Julia again took Charlie’s hand, a burst of hope bloomed in his heart. He clung to his darling girl, and grinned. *

The poem at the beginning of this story is from a Civil War-era Valentine, sent by Joseph Forrest of the 8th Volunteer Illinois Infantry. It’s in the collection of the Kansas Museum of History and the Kansas Historical Society. 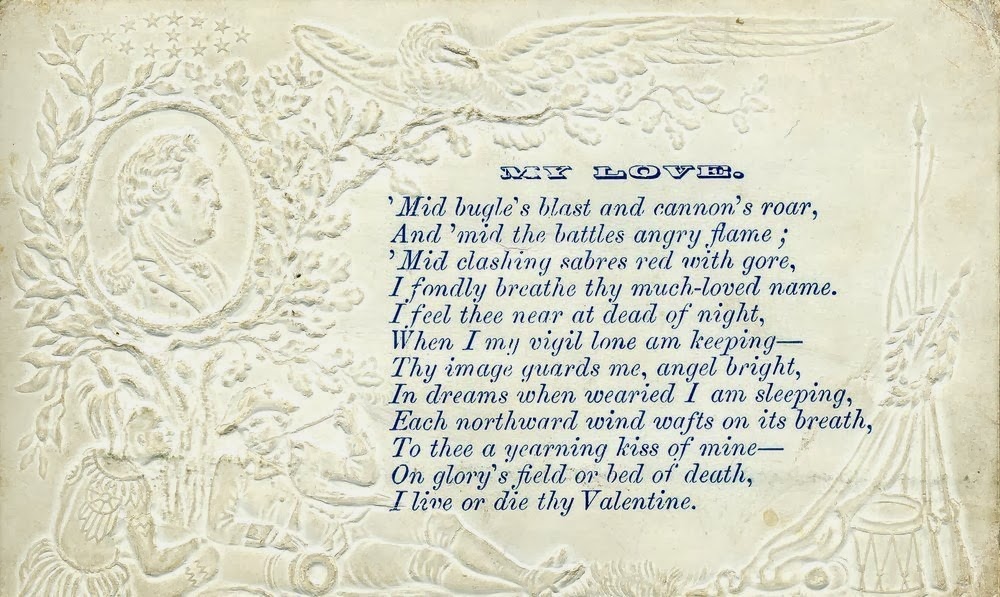 If you enjoyed this story, read more about Charlie and Julia in TERMS OF SURRENDER, a Western Historical Romance by Lorrie Farrelly. Available in ebook, paperback, and audiobook from Amazon, Barnes&Noble, iTunes, and Audible.com.