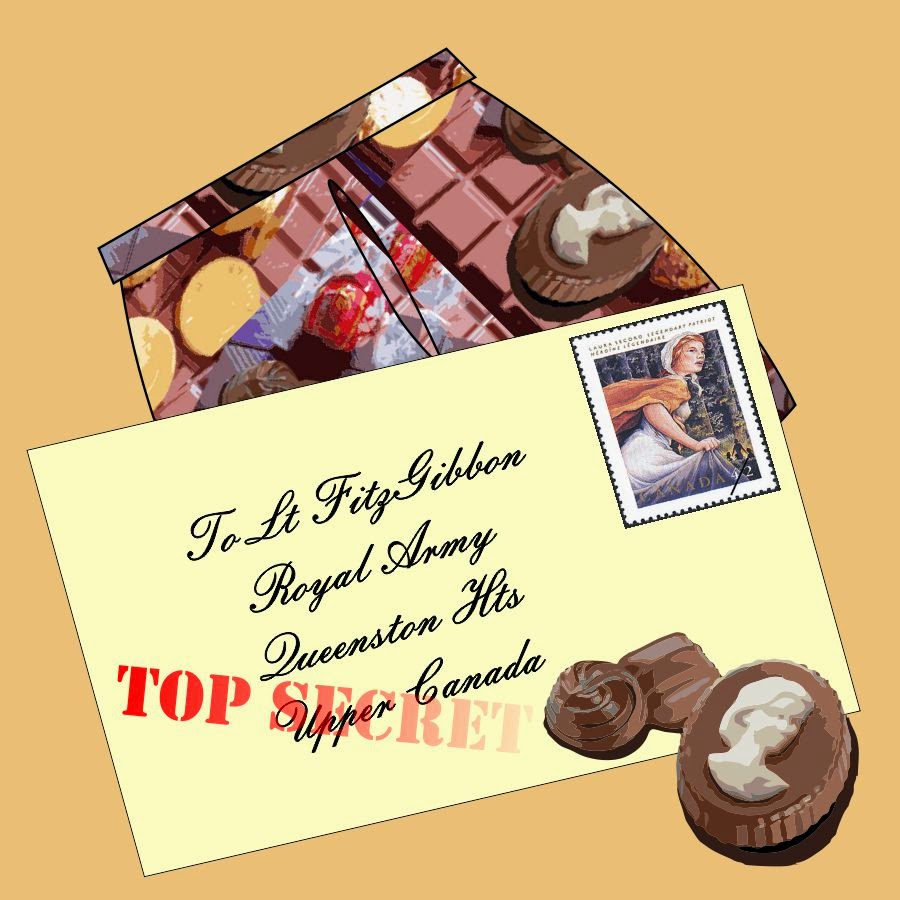 The white house at the bottom of the green hill was more than twenty miles from the British forces at Beaver Hills. There in the white house, a young woman, Laura Secord, and her wounded soldier husband, James, billeted American troops.

It was June 21, 1813, the British forces unaware of a fiendish attack planned by the chocolate eating Americans in Laura Secord's home. James lay helpless with bullet wounds in his leg and shoulder, hardly able to lift a hand to pop a miniature mint into his mouth.

"Good men," Laura said to their slobbering guests, "I must go out and find Bossy Cow to have milk for the liqueur tomorrow. Otherwise no Bossy no Candy."

"You nefarious Loyalist," a captain said, "we won't need your box of miniatures tomorrow, nor a bag of your perfect sized bars…"

"This is Canada," James said gently, raising himself onto his good arm and reaching for a French & Frosted Mint hot chocolate.

The American soldiers began to murmur amongst themselves. Laura could hear "surprise attack" and "June 23" and "Beaver Dams". She knew the British commander, Lieutenant James FitzGibbon, would be caught unaware if the Americans attacked his post, as her husband had informed her that their encampment, reached only through a trail of barbed wire, land mines, and cow dung, was not prepared for an invasion. James had recently come back from Queenston Heights himself, where he had been sorely wounded and now could scarcely lift a Milk Chocolate Crispy Chip to his mouth.

So it was that the next morning, brave Laura beat Bossy Cow with a stick ahead of her on the treacherous twenty mile journey alone to Beaver Dams, to warn the British Lieutenant FitzGibbon and his Loyalist troops of their danger.

She was successful. The Americans were beaten back, and upper Canada held. No acknowledgment was given to the slender, brown-eyed woman who so courageously trod the slippery path of loyalty to the Crown and warned the British and their Mohawk allies of an impending invasion. James later succumbed to an acute case of diarrhea, and Laura died impoverished and unrecognized at the age of ninety-three, other than having a number of schools, statues, a granite monument, a circulation stamp, a chocolate factory, a deluge of articles, entries, and plays, and a coin named after her.

Of course, that was after her death. Small help it was to her then, guys.