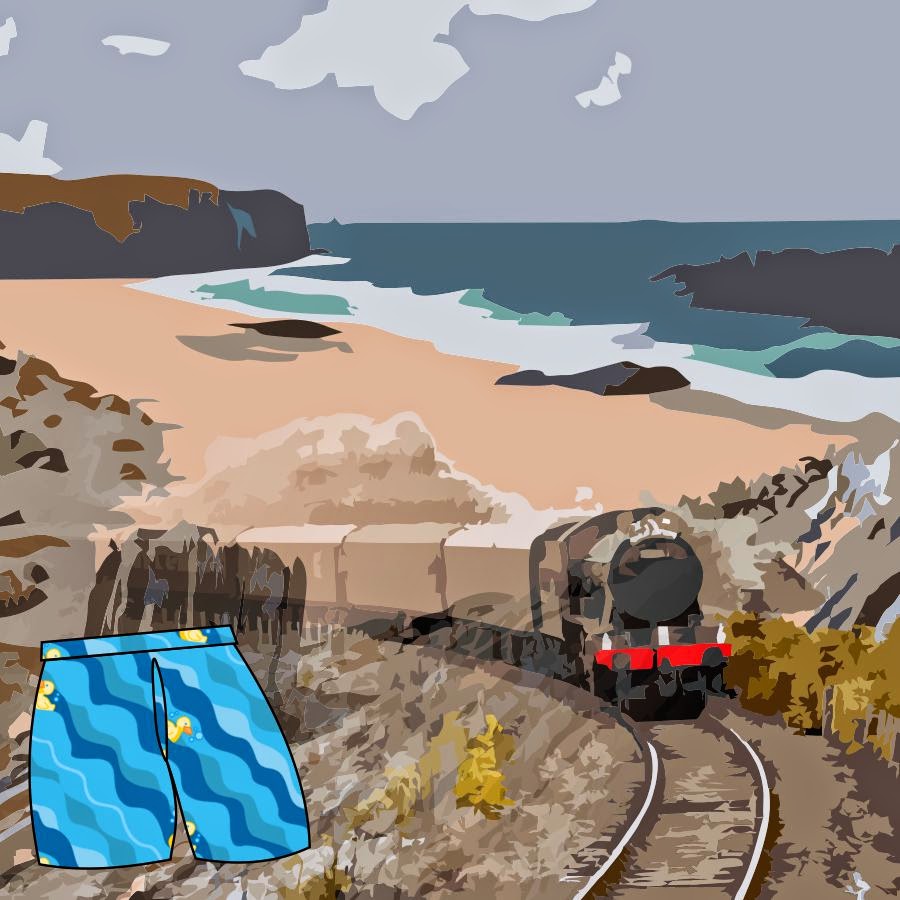 We stayed at Leven Lodge that summer. Four children and mum and dad. The children in age from ten, six, five and two. Quite the handful. My sister Caroline- not even a twinkle in mum and dad’s eye yet.

We took the train to Portobello, a popular seaside beach, from a suburb of Edinburgh. I fell in love with train travel that summer even though we only travelled about ten miles. First the bus and then the train station. I loved the noise and the steam coming from the train. The trip only took about 30 minutes but to my young self it took forever.

We loved the beach. Dad would grab a couple of deck chairs with their stripped canvas seats. You had to get there early enough to claim a space with sand. Mum pushed Alister in his pram and the older kids carried towels, buckets and spades, swimming tires and of course a flask of tea for mum and dad. Bottles of lemonade were purchased at the concession on the promenade along with the promise of an ice cream cone later in the day. 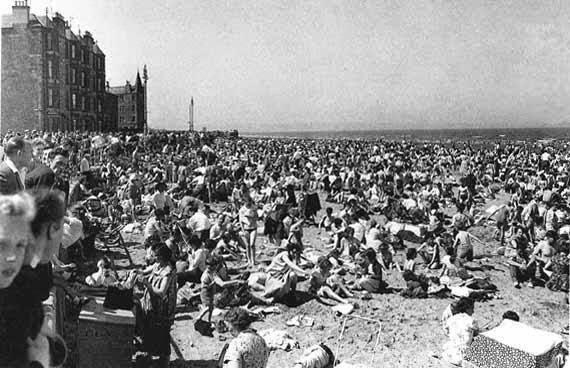 Once we’d navigated the baby carriages, stepped over spread-eagled bodies and the odd dog or two mum laid towels on our sand claim. It wasn’t the nicest sand but who cared. The sand had gritty black shale mixed through but the sun beat down and the waves beckoned.

The water at Portobello is the Firth of Forth flowing in from the North Sea. It is frigid - some would say freezing. If you look closely at the picture only the very hardy are swimming. Not a lifeguard in sight. We’re a nation of paddlers, especially in the sea. But Portobello had a large outdoor pool with a high diving board and every half hour an announcement rang out that the artificial WAVES were starting. Great fun.

The children soon changed into bathing suits. As the public toilets were too far away we would change under a towel. We’d surely be lost if we went by ourselves. The men rolled up their trousers to the knee and stuck a knotted hankie on their head to keep the sunburn and freckles at bay. Some would still be sporting a shirt and tie, or at least loosed at the neck. A concession to relaxation. Teenagers slathered on baby oil hoping to tan while lying on the sand about five inches from the nearest sunbather.

Scottish skin is on par with our Nordic neighbors. Blondes, redheads and white skin. We start out in the morning pale and wishy- washy. When it’s time to pack up, the look of a cooked lobster comes to mind. Sunscreen- what’s that?

On quieter days there were donkey rides, sharing of shells found at the water’s edge and of course ice cream before settling down to serious sandcastle building. Mum and dad took turns having a nap. After the fourth trip to the bathroom with one or the other, we packed up and headed for a walk on the promenade.

After jostling with the crowds dad would find a bench where we’d all crowd around mum doling out fish and chips wrapped in newspapers. Oh I can smell the malt vinegar. As there were six of us and a pram we didn’t attempt going into a café for a cup of tea. I’m sure mum would have liked one and dad’s preference would be to nip into the pub for a pint. But no… we went back to the Lodge for ‘our tea’. After all mum and dad were paying full room and board. So if we paid for it we had to eat what they prepared. My sister still has the receipt. Fifty pounds for a week’s stay with all meals for six. Ninety one dollars in today’s currency.

In the late afternoon we’d sing our hearts out with the Salvation Army brass band. The ’Band of Hope’ they were called. I still remember the hymns we sang. ‘Way, Way Over Jordan’. I used all the arm movements as we sang my favourite hymn. . Out on the pier the waves crashed in and the smell of the sea water intoxicating.

Memories are subjective. What did we do for the rest of the week? As young as we were the candy floss held a great attraction when we walked along the promenade. Everything smelled different and the colours brighter. Jumping in the shallow water and squealing when we splashed each other. Eating in the lodge dining room and sleeping in a new bed were all first experiences. Simpler times and seemingly quite innocent. No TV. No phones. We may have had a battery radio with us. We were not completely out of touch.

Edinburgh is not known for abundant sunshine and favours rain most of the time, but I seem to remember the sun shone all the time in Portobello that one magical week. I’m sure my older sister’s memory is different from mine and my brothers, being younger still, may not recollect it at all. I’ll always remember the summer of ’52.

Pam Blance is one half of yet to be published author Jamie Tremain . Retired from the corporate world Pam collaborates online with her writing partner, Liz Lindsay and anticipate publication in the near future.
jamietremain.blogspot.ca