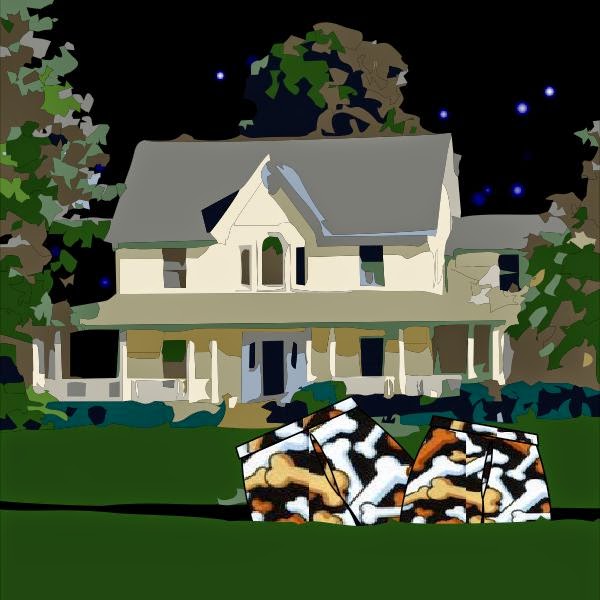 
Summer - sultry, stifling, sweaty. That’s what my parents complained about that August. But I was fourteen and off to babysit and earn, maybe, five or six dollars. Money I could use to add to my 45 music collection or check out school supplies at Stedman’s. Have I dated myself enough?

The money not yet in my pocket, I’d it spent ten times over in my head during the drive to my babysitting destination. Somewhere new, a last minute request from friends of my parents- the Hutchins. But really out in the boonies. Not that I paid much attention to the scenery.

Mr. Hutchins drove his car up a long driveway. Gravel crunched underneath and crickets chirped frantically. The house loomed large, and isolated. I couldn’t see any neighbours and it backed right up to the dense woods behind.

“Sorry to tell you our air conditioning’s on the fritz, but we have lots of fans going. There’s always the chance of a good cross breeze through the windows.”

And now I noticed how the heavy, humid air cloaked me. I didn’t feel any breeze, just mosquitoes looking for a snack on my neck and arms. Well I’d only be watching TV, so how bad could it be.

Two children were in my care for the evening, a boy and girl, aged four and two. Both were already in bed and their fashion plate mother assured me they’d sleep through just about anything.

“There’s lemonade in the fridge and chips on the counter. Help yourself. We should be home no later than midnight. Oh and we’ve locked the dog in the basement. He sleeps there because it’s cooler for him.”

Then they were gone. I checked in on the little ones. Sheets had been kicked off, and their sweat soaked hair clung to their foreheads, but they didn’t stir.

I couldn’t ever remember feeling this hot at home and grew more uncomfortable with each step. The sweat rolled down my back and I wished I’d worn cooler clothes.

The TV beckoned and I grabbed a glass of ice cold lemonade and the bag of chips. I sure wasn’t crazy about the idea of the over large living room windows having no curtains. It wouldn’t be just the heat that kept the lights off while I babysat there.

TV channels were limited and I actually had to get up from the sofa to change the channels – imagine!

Daylight faded and soon the only illumination came from the TV’s glow. For some reason I didn’t feel like watching Outer Limits that night. My only other choice? The Lawrence Welk Show…and a one and a two….

The heat and gentle breeze from a fan across the room made me sleepy and I must have dozed off. Until I was startled awake by a dog’s bark.

Right, the dog. Supposed to be in the basement. Good , I wasn’t fond of dogs, and if it had been a large one I’d have been nervous. He barked a couple more times. I hoped the barking wouldn’t be ongoing for the rest of the evening.

It looked like I’d better hope again. The barking grew louder, and urgent.

I certainly wasn’t sleepy anymore. The barking put me on edge, but that was nothing compared to the thumping and banging that began to accompany it. All coming from the basement.

It freaked me out enough that I decided to call the police in case someone lurked on the property or tried to get in the house. That’s why dogs barked right?

I crept to the kitchen and lifted the receiver from the wall phone. Ready to dial the police when it hit me…I had no idea what address to provide. How could they ever find me? My parents were out for the evening – I was on my own. My unease grew into low level panic with each bark and bang from the basement. Then came the sudden high pitched yelp. And silence, no more barking and no more pounding.

The sweat down my back had turned to icicles If a threat had come to this house I had to be responsible for the tykes sleeping down the hall.

A fireplace poker seemed a good bet and I grasped it between slick palms as I inched my way down darkened steps to the unfinished basement. No dog- like noises at all, but the banging had resumed. Confirmation that someone had broken in and they’d obviously killed the dog.

I raised the poker over my head and found the light switch. As light flooded the basement I screamed at the apparition before me. The intruder also had a poker raised ready to strike. My knees were jelly and I almost laughed out loud when my brain finally realized it was my reflection I’d seen in the darkened window.

Relief was short lived, the banging started again off to my right. In an unlit corner I saw a huge sheet of plywood angled across the wall and held in place by a four-drawer metal filing cabinet. I watched in disbelief as the board slammed into the cabinet and bounced back. And again, and again.

The poker, now weighing a ton, stayed close to my side as I crept closer. I had no rational explanation for what was happening. The board was up to my chin in height and I had to strain to see over.

That’s when I saw it. Hopeful brown eyes, over a panting tongue at one end, and a feverishly wagging tale at the other. THIS is where they put the dog? I slumped to the floor and vowed never to babysit in the country again. 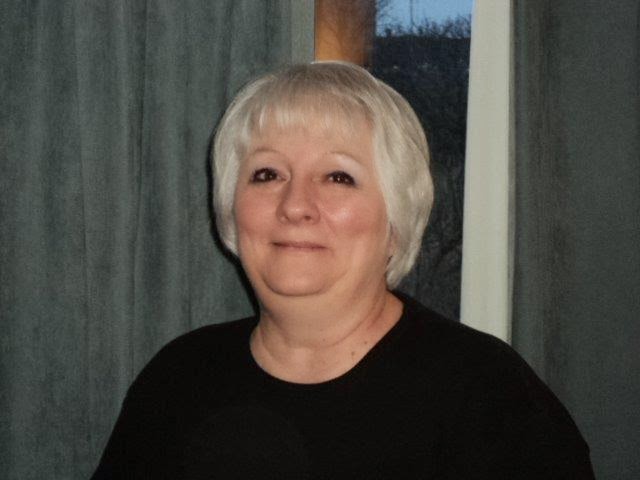 Liz Lindsay is one half of yet to be published author Jamie Tremain. Still working 9 – 5, this grandmother of four collaborates online with her writing partner, Pam Blance, and hopes they will be published in the near future.