A Question of Image

I was trying to think of something to write  on the subject. Not coming up with anything on my own, I asked my fourteen year old son. He suggested I talk about how the fashion for different types of women's figures has changed over the years.

Speaking of war, one of few benefits of World War I and II were the changes to the status of women. Being called upon to do "men's work" in the factories, shipyards and in the military, changed how women saw themselves and how they were portrayed in the media. The muscular Rosie the Riveter comes to mind. Photos of sturdy young women were used to promote the Land Army. Attractive but business-like women in uniform were used to entice recruits for the women's army, navy and air force auxiliaries. 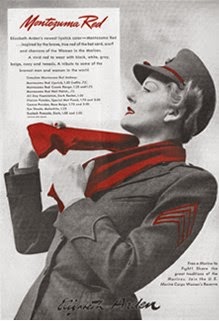 Canadian expat Elizabeth Arden was commissioned to create makeup set for the US Marines Auxiliary. The cosmetic maven promoted good health as well as the right makeup to achieve beauty. The clear message was that women could be pretty and useful at the same time.

Post World War II, an equally vigorous campaign was waged to send women back to the kitchen. What real women wanted was a new washing machine or vacuum cleaner, not independence. It wasn't enough to be pretty, you had to be glamorous. The model of beauty became Marilyn Monroe and Jane Mansfield.

Young women exercised to chants of "We must... we must... we must develop our busts." Lifting a separating was important. Tight sweaters and big skirts were in vogue. (Not unlike tight, rip-able bodices and bustles a century before.)

At least Marilyn Monroe and her contemporary pinups* were meatier than the average starlet these days. That trend started with Twiggy. She popularized the notion that you can't be too skinny.

The frail, almost anorexic look isn't new. Lord Byron made it popular with his passion for Caroline Lamb. But you had to be a member of the small number of elite to have the time and inclination to subsist on a diet of vinegar and wafers. The thin poor didn't choose to starve themselves.

It took mass media to get a hold on the collective women's conscious and convince them they didn't look right. Too fat. Too flat. Too sort. Too tall. Too not like the models seen in ads. With the help of Photoshop, the models don't look like the ads either.

So, will the pendulum of fashion and history swing the other way? Or will we look beyond fashion to define beauty?

[* Note: I have a great deal of respect for Marilyn Monroe's ability as a comedic actor. For that matter, I don't have anything against Twiggy. I do object to how they were used to objectify women in order to sell products. Advertisers should stick to kittens and cartoon bears to do that.]
beauty body image Elizabeth Arden fashion Marilyn Monroe Peter Paul Rubens Twiggy Women's History Month