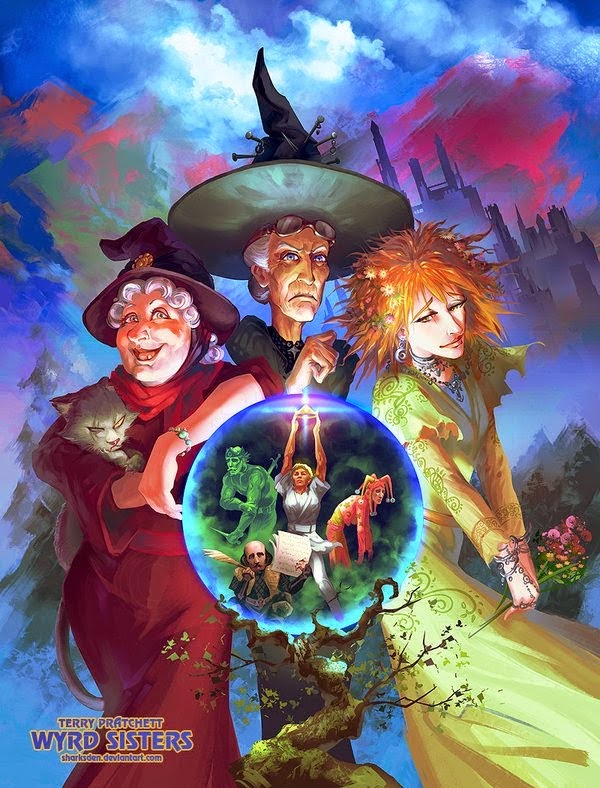 I was introduced to Terry Pratchett via his Discworld novels in 1989. My parents, my sister and I were visiting London (my mother's hometown) -- the last trip the four of us would make as a nuclear family. My sister and I would wander around the west end while mum and dad had a nap in the afternoon. One day we discovered a "gentile blackhole"* aka a bookstore, and I discovered Wyrd Sisters.

That was the day I made a grievous tactical error. I only bought the first two Discworld books, The Colour of Magic and Light Fantastic. I should have bought every book up to and including the newly released Wyrd Sisters - or at least also bought Wyrd Sisters. The books were slow to be released in Canada back then, and it took three years before I finally read the book that first caught my attention.

I can't remember how long it took before I read Guards,  Guards, the book that started my favourite series within the series, and ongoing unrequited love affair with Commander Sir Samuel Vimes, Duke of Ankh Morpork. I read them all, from Guards, Guards to Snuff at least once annually.

Fast forward a dozen years later, my collection of Discworld novels was complete and up to date. I was (and am) the mother of two wonderful children and every night, for about a year, I had to read  Where's My Cow to my son Sam**... complete with appropriate voices. He was delighted that Sir Sam was reading the title story to Young Sam, his son.

When my kids got older, we started collecting the audio books so we could listen to the books in the car. Unseen Academicals is the family favourite. It's the only one we have that's not abridged. (That must be fixed because you shouldn't miss a word of a Pratchett novel.)

When my daughter hit her head and we spent about six hours in Emergency, I read Wee Free Men to her... with appropriate voices.  When we finally were called, a woman remarked that she was sorry she wouldn't hear the rest of the story and, by the way, what part of England was I from? (I'm born and bred Canadian.)

I have never met Sir Terry. I do not know his family. But he and his books have been part of my family for twenty-six years. I'm going to miss him, but he will live on through his books.

* “A good bookshop is just a genteel Black Hole that knows how to read.”
Terry Pratchett, Guards, Guards

**Sam is named jointly for Sam I Am from Green Eggs and Ham, Sam Vimes from the Discworld series, and the first cat I had as a child. But don't tell his father. He has other ideas.