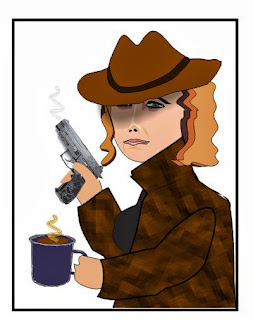 “Do you make up all your characters, or do you put some of yourself in them?”

That is the question Melodie Campbell answered last week in her post: Damn Right, there’s Me in my Characters!

This got me thinking. I know how I create characters and I can't help but insert a little of me in each one... including the villains. With the protagonist it's inevitable.

My characters are like my children... if my children had been grown in vitro, with multiple fathers.

For example, if I needed my character to be a bond enforcer, I'd start thinking about what I would be like doing that job. What if she got the job through her cousin and really wasn't cut out for it... at least not at first.

I can relate. My cousin Hilary wasn't a bail bondsman, but when I needed work and she needed a writer, she contracted my services. She was my first client as a freelance writer/editor. Getting that job from a family member made me feel a bit like a fraud and gave me something to prove.That's something of me that would probably end up in my finished character.

Next I have to look at what my character needs for the story I want to tell. What are her cultural roots. What are her hair roots? What are her skills and where did she get them? I start picking out donors who can contribute to the creation of the character. Maybe I want her to look cross between Katherine Heigl and Sandra Bullock. There's two donors. Maybe I want a little Married to the Mob vibe to her character. There's another donor.

Would I end up with Stephanie Plum? Not likely. Even if we had all the same "fathers" in the mix, Janet Evanovich would still be the mother. Steph is her baby.

My offspring might be just as disaster prone, but she'd get into trouble for different reasons. Her house might be a mess, but she'd know how to cook. And coffee, not birthday cake, would be her go-to pick-me-up. And she might turn out to be a he. Who knows?