A Summer Short from Alison Bruce 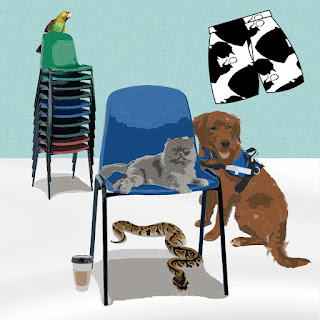 It was a hot summer evening. Air conditioning in the building consisted of open windows and noisy fans. We had the fans, but members of the group were a wary of open windows because of the sensitive nature of our discussions.

Doctor (PhD not MD) Bill dipped his head toward me. He had already taken me to task about my lack of participation. I nodded and stood.

“My name is Rachel and I am an amateur sleuth.”

The response was less uniform this time.

“You got that right.”

“Tell us something we don’t know, doll.”

Dr. Bill intervened. “Charlie, you’re not at a crime scene. Leave the tough guy at the door.”

“Alicia, did you remember to take your antihistamine?”

After a brief pause to dig into pockets or rifle through purses, five bottles of antihistamines were offered.

The ever helpful Goldie brought Alicia a bottle of water. Alicia wiped the dog spit off on her skirt and gave the golden retriever a pat on the head. Her cat Rufus, a silver-grey Persian, took a swipe at Golda, but it was perfunctory. I’d only been with the group for a couple of months, but most of them had been meeting for over a year. All the animals in the room were friends, or at worst, frenemies.

I looked around the room and sighed.

There were a lot of draw backs to being an amateur detective. If you weren’t independently wealthy, like Miss Maypole, or had a pension like Charlie, you had to have a day job. Some employers were flexible, but others wanted you to show up on time and work a full day. They didn’t understand that your vital role in the solving of crime or the inherent risks–like having suspects try to kill you at your workplace or lawyers trying to sue your ass.

Professional private investigators hated us. Not that I blamed them. Who was going to pay them big bucks for doing what we did for free? Only the guilty.

Then there were the police detectives. They’d bluster about you not having any business sticking your nose into an active case, and then expect you to come up with something brilliant within minutes of your arrival. You had to do this without formal training, and you had to do it for free.

But that wasn’t the worst part.

“I still don’t have a pet. The cat I adopted moved in with the family down the street.”

Lulu, whose six cats, two dogs and a rabbit took turns accompanying her to our weekly group session, put up a hand. “What about the rescue grey hound I found you?”

“And the snake?” asked Charlie.

It was my turn to shuffle my feet. “Do you remember my first night? I brought him to meet the group…”

They all started looking around as if Reggie would just pop out–except Dr. Bill. He was standing on his chair.

“Don’t worry, Doc. I’m betting Reggie has moved on to a better place.”

There was a collective sigh and Bill sat down. Father Wight bowed his head in prayer. Other than me, he was the only one who didn’t have a pet partner. He didn’t need one. He had God in his corner. However, the assumption that I was responsible for an animal’s death pissed me off.

“I only meant I bet he’s probably taken up residence in the boiler room. Reggie likes the heat and there are plenty of mice to eat.”

Charlie’s parrot Pauley had finally decided to chime in.

“Anyway,” I said, sitting down because I’d been on my feet all day, “it’s getting to be a problem. The detectives aren’t bad. They know they need my expertise. It’s the uniformed cops. Last week, one of them gave me a pet rock and told me not to lose it.”

With a hand gesture, Miss Maypole sent Goldie to me to give me a hug.

“Thanks Goldie. Thanks Miss Maypole. I’ll be fine. I just wish having a pet partner wasn’t essential to being taken seriously as an amateur sleuth.”

“If only,” said Alicia, wiping her runny nose.

This led to some indignant mutters from the animal lovers.

Dr. Bill spoke over the noise. “As you know, Rachel, I encourage you all to share work experiences so the group can offer tangible support. I haven’t pushed, because you’re new, but maybe it’s time for you to tell us about your work. Detective work, that is.”

I knew he wasn’t asking about my day job, although the two were related.

“No shit!” said Father Wight. He crossed himself. “I mean Good Heavens.”

There was a chorus of “Cool” which might have been directed at the priest.

“It is pretty cool,” I agreed. “Of course, if someone has an excellent memory and doesn’t use electronic devices, there’s nothing for me to detect… unless my surveillance equipment records the person passing on the information to their client.”

When I pulled out my tablet, Dr. Bill went as pale as Father Wight was dark. I’d already cued the video. All I had to do was hit play.

The view was from the air return. Even with the grating, it was clear that Dr. Bill was talking to the head of a private investigation agency we all knew for working with defense attorneys to discredit police (or amateur sleuth) gathered evidence. Doc told the leggy blonde how Alicia solved the murder of a mob bagman while her cat lulled the culprit into a false sense of security by use of excessive purring.

“I think we can use this,” said the P.I. “The confession was obtained under duress.”

She crossed her legs. Charlie whistled and was shushed. Lulu pushed Doc back into his seat. Everyone’s attention went back to the video.

“I’ve got a more pressing issue, Bill. I need to get past that damned service dog. The old lady has a file that could make life difficult for one of my clients.”

“Cheese. She’s addicted to cheese. It’s the only treat Goldie will take from a stranger. You can drug her that way.”

But Doc was wrong about Goldie. His cheese bribe didn’t work when he tried to cut and run. Miss Maypole and Goldie were the ones who brought me in on the case of the Support Group Mole. The cheese was a red herring. Goldie was lactose intolerant.

Later I went down to the basement to retrieve Reggie. He coiled his way up my arm and settled on my shoulder. I wasn’t great with real animals, but I was a whiz with the electronic kind. If Doc had ever spotted Reggie in the ducts, he’d just think my pet python got loose, not that he was being shadowed by a mobile surveillance system. Reggie was so lifelike sometimes I forgot he wasn’t real. I looked down at a neat row of dead mice beside the furnace. Sometimes Reggie forgot too.

“Maybe I should start bringing you to crime scenes.”

Reggie rubbed my cheek with his head. 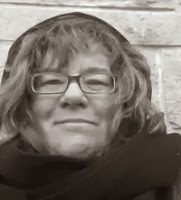 Alison Bruce is the coffee-fueled author of History, Mystery and Romantic Suspense novels. You can find out more about her and her books on this blog site or at www.alisonbruce.ca. Reviews and donations of coffee (dark roast, black, no sugar) are always appreciated.

(*Maybe in time for Holiday Shorts.)