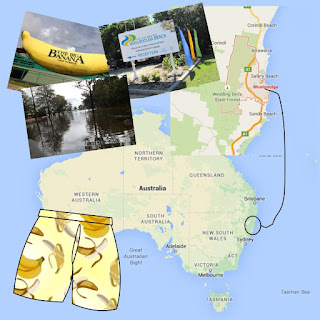 Those who know me are aware that my dad passed away recently and left a huge hole in my heart. I thought I would recall our summer holidays with you.

In the mid – late 60s when I was 9-13 years old, dad would always take two weeks off in summer – December to March here in Australia, and we would head north the day after Christmas. Mum would wake us at around 2.30am, not that I had been able to sleep – too much excitement, and with four kids aged between 4 and 9 years old crammed in the rear seat of dad’s Holden station wagon, off we’d go. The back of the car would be packed to the ceiling and the roof racks were always full of tent and camping equipment. Can you imagine taking four kids camping in a tent? 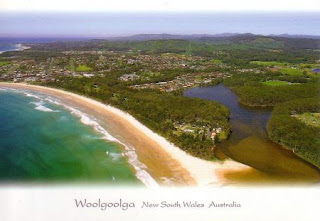 Our destination was a place on the far north coast of NSW called Woolgoolga (try saying that with a few drinks in you) about 8 hours north of where we lived.

The Pacific highway, the road leading north, was narrow, bumpy and downright dangerous even then. Our first stop was always the truck stop at Raymond Terrace, 4 hours from home, where dad would refuel while we made a beeline for the loo. Dad always warned us it was our only stop and if we didn’t go now, we would have to hold on until we arrived. It was here we discovered Jerry, the resident talking Magpie. He’d been with the owners for years but had recently picked up “truckers language”, he could put a sailor to shame with his swearing. We loved him as he would copy whatever you said.

We would continue on our way, playing ‘eye spy’ and any other game of the time. Us kids would argue and squabble causing mum to almost wrench her shoulder out of joint as she reached back to whack the offending child at that particular time. Then would come the mountains and winding road near Coffs Harbour. We would hear the inevitable thunk as one of the retreads separated from the rest of the tyre. AGAIN! Every year without fail this happened and every year dad and I would be on the side of the road unpacking everything from the back of the car to retrieve the spare. Once the tyre was changed, everything went back in – funny how it never seemed to fit as well as it did before the exercise began. 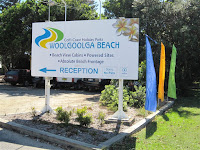 Finally we would arrive in Woolgoolga and mum would read us kids the riot act about staying close by while she and dad erected our tent. We never listened and immediately went off exploring. To a 9 year old kid the tent seemed huge and once assembled, double bunks, a stove, dining table and chairs etc etc were all placed within. Mum and dad never did everything in half measures and mum liked her comforts.

The holiday would then begin in earnest. We would visit the Big Banana and have a ride through the banana plantation in a rickety train, the ice cream factory – yum, and the cheese factory. After watching cheese being made, it was years before I would eat it again. 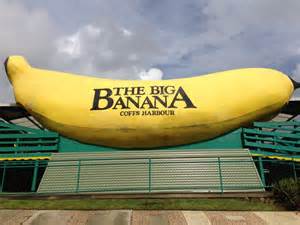 Swimming at the beach was always a challenge. Mum would sit on the sand yelling at us kids - “come back to where I can see you”, “don’t go in so far”, “where’s Brian” (my younger more adventurous brother). Being English, my parents were very wary of the surf. One year, dad made the mistake of leaving his foot sticking out from under the umbrella in what I’m sure was 100 degree heat. The rest of the holiday was spent with dad on crutches with an ankle five times its normal size and a huge dose of sunburn poisoning.

Then, after a couple of scorching hot days, which I loved, the rain would start. It would bucket down and us kids delighted in touching the inside of the tent (after being told at least a zillion times not to) to watch the water run down the inside. The flooding came next, water at least 8inches deep inside the tent and four kids splashing and having the best time. Every year, for six years, this was repeated (with the exception of the sunburn). Mum and Dad persisted, hoping things would change but they never did. 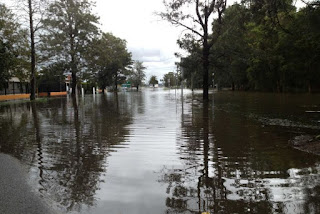 The final year our tent literally began floating away – the straw that broke the camel’s back. After that we would holiday down south, 5 hours from home, in a motel! No rain, no flooding, no loss of retread. Was it as good? You bet it was, I had my dad for two whole weeks!

It’s Winter down under in most areas of Australia but where I live in Queensland, we have a wet season and a dry season only. It’s dry season now, cooler but still warm and sunny. I hope you have enjoyed this peek into my past.

Enjoy your summer, stay safe and as we say in Australia remember to – SLIP, SLOP, SLAP. 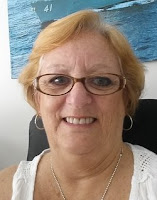