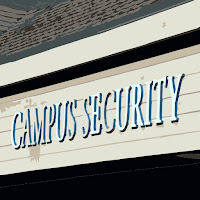 Although I haven't experienced a murder on campus as Evan Dunstan does in Dead Man Floating, I was a security guard and, like Evan, encountered my share of crime on campus. Sometimes, I'd come across something while patrolling, but most of the time dispatch officers would send me to investigate a complaint. When I later worked in dispatch, I encountered many events through phone calls and in-person visits at the front desk. It also became clear that certain incidents were more common than others.

Mischief was at the top of the list. Let’s face it, some students truly believed that graffiti and stink bombs were funny. Others pulled a fire alarm or phoned in a bomb threat in a desperate bid to avoid an exam or express anger.

Laptop and electronics topped the theft list, and students weren't the only victims. Instructors and staff who left their office doors open even briefly had occasionally found their wallets, purses, or phones missing.

Misadventures with vehicles was also a common problem. Keyed cars didn’t happen nearly as often as busted windows and stolen property. Most of these incidents occurred during September and October when the lots were busiest. BC weather is often warm and sunny in the early fall, and too many students forgot to roll up windows or lock doors. As a bike patroller, Evan would spend a lot of time patrolling the lots and dealing with this type of incident.

Aside from the campus pub and the dorms, drinking on campus was a strict no-no, yet we had more than our share of this behaviour. Once I was sent to investigate a rowdy classroom full of students consuming beer and hard liquor as they celebrated the end of exams. I and colleagues had to record every name and ID number into our notebooks and then write them down again on a handwritten report.

Of course, conflict on campus occurred, and most issues centered around students who didn't get along. Sometimes, the was rivalry over a woman. Other times it was a bullying issue or alcohol-infused drama of one type or another. On rare occasions, a female instructor faced unwanted attention from male students.

Assault threats also occurred now and then, but I didn’t experience this directly, not like Evan will. In fact, his security career is going to be one heck of a ride. 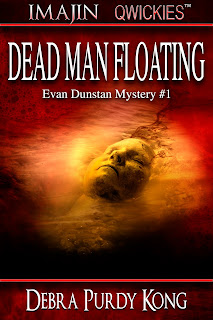 EXCERPT FROM DEAD MAN FLOATING:
Propping the kickstand, Evan removed the small flashlight attached to his belt then stepped nearer the water. Oh shit! It was a hand! A freakin’ hand! And legs! He moved the flashlight up the body until he spotted the grey fringe circling a bald head that glowed like a moon. Evan shivered. Was the guy alive? He wouldn’t have to perform CPR, would he? That first-aid course last year didn’t go so well after he broke that manikin.

Author of six mysteries and over fifty short stories, Debra has won numerous awards for her work. She conducts workshops, is an administrative assistant at Simon Fraser University, and also works as a substitute facilitator for the creative writing program with Port Moody Parks & Recreation. More information about Debra’s books and her blog can be found at