Happy Holidays to All 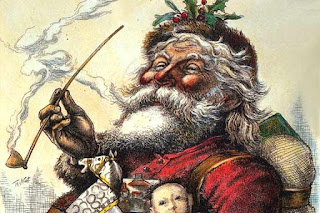 Twas the day before Christmas and all through the station,
The passengers were resting from their trek cross the nation.
Meanwhile out on the plains, awaiting the stage,
Was Shamus McGraw, in a terrible rage.

McGraw was an outlaw who lived by a code:
Everything was fair game when met on the road.
But if his quarry escaped, McGraw let him be,
With one small exception, Clayton McGee. 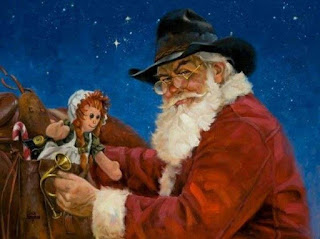 McGee was Ranger. His code was the law.
His job was to bring down the likes of McGraw.
He questioned known friends and McGraw's family
Including his sister, the fair Emily.

"Not fair!" said McGraw. "This isn't right,
To bring a man's family into the fight."
McGee crossed the line, so now McGraw waited
To rescue his sister and see himself sated.

When the stage was halfway betwixt station and town
Shots rang out and the coachman was down.
Then McGraw rode in, his expression grim
For another gang got to the coach before him. 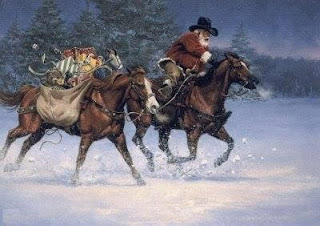 In the twilight he recognized the surly Black Bart
Whose ruthless violence was honed to an art
Though generally not one to shoot for the kill,
McGraw thought of his sister and shot with a will.

Though he was outnumbered, seven to one,
McGraw rode in heedless, firing his gun
He shot down Black Bart and routed his gang
Then rode back to the stage, with barely a pang

McGee might arrest him, or he might be dead
But Emily's safety was the only thought in his head
Imagine the look on the face of McGraw
When McGee hailed him hero and brother-in-law. 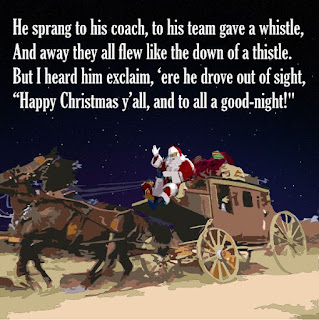 "Take the gift," said the coachman, when he was able.
"Talk to the Ranger. Put your cards on the table.
"If not not for you, friend, I might now be dead.
"So put thoughts of a new career into your head."

On the night before Christmas, Shamus McGraw
Was sworn in a Ranger, no more an outlaw.
They toasted his bravery and the new Mrs. McGee.
No one noticed the coachman, no one except me...